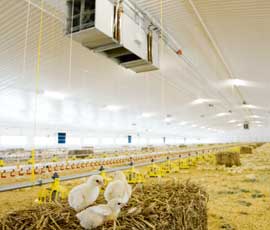 Freedom Food has launched the latest in a series of videos explaining the basics behind its higher welfare production scheme, featuring members and poultry farmers Nick and Claire Bragg.

Shot on their Frogmary Green Farm in Somerset, the couple describe their working day, and discuss the lower stocking density, natural light, perching and pecking objects that characterise their production system.

The video shows the large, clear span sheds in which the 83,000 birds live, and describes such things as temperature control and moisture regulation.

The couple also explain their policy of openness, holding regular events such as Open Farm Sunday, to show the public how well they care for their birds. According to Claire Bragg, many consumers still believe broilers are kept in cages, so she is keen to try and dispel such myths.

“To be a good stockman is actually fantastic,” she says. “You’re looking after an animal that needs your care, needs your attention. Going into the Freedom Food scheme makes it so much more enjoyable to walk the houses. They’re active birds, and they are very, very funny to watch at times.”

A spokeswoman for Freedom Food explained that currently the video was being used for its website content, but it would also be used reactively/proactively as media, PR and lobbying opportunities arise.