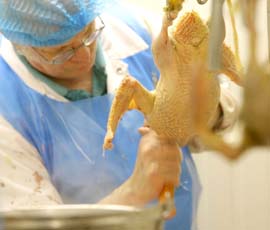 A select group of over 70 UK companies is expected to dominate the market in the poultry industry over the coming year, industry analysts have predicted, although the outlook remains positive for small companies.

Plimsoll Publishing’s lates study analysed a total of 758 companies in the UK poultry industry and identified 76 companies that have achieved an average 17% growth in the last year, despite growth in the UK only averaging 5% over the previous two years.

It also found that 62 had lost 9% of their market share as a consequence of those high-growth companies.

The remaining 620 had only realised a 4% growth in sales over the last year.

“This is absolute evidence that whatever growth there is in the market is being captured by a select group of companies,” said David Pattison, author of the new study.

Mr Pattison said the reason the 76 companies were growing was because they had a better understanding of the market.

Despite concerns larger companies are forcing out their smaller competitors, the study found growth was still being achieved by small, innovative companies too.

The analysts found no clear correlation between size and growth. While larger companies – those turning over £50m or more – included some of the biggest growers, they were also most likely to be affected by a fall in market share.

The full 758-page financial report, including the companies’ financial performance over the last four years, is now available in PDF format, for £350 (+VAT) from Plimsoll.