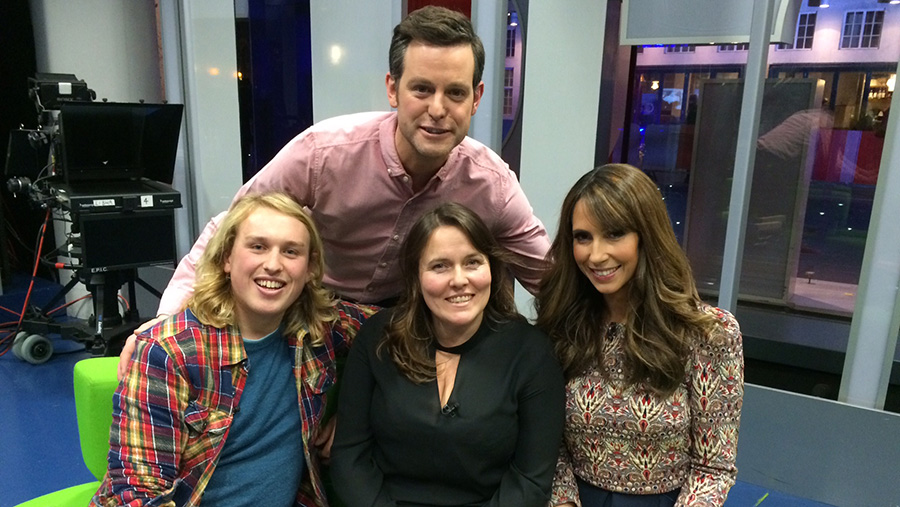 Deano Macmillan and his mum Susie with The One Show's presenters Matt Baker and Alex Jones.

Plans to rehome thousands of organic layers from the Mac’s Farm in East Sussex received a fillip this week, when owner Susie Macmillan and her son Deano appeared with three of their hens on the BBC’s One Show.

Mrs Macmillan explained the farm had done two major rehoming exercises in the past seven years, with all 9,000 birds finding a new home on each occasion.

“But, even though there is a lot of interest among the general public in keeping backyard chickens, this time we felt we needed to publicise the rehoming well in advance,” she told Poultry World.

“Initially we put out a press release, and that was picked up by [Brighton newspaper] The Argus. That article was seen by a producer on the One Show and that day we got a call saying they wanted to come and film on the farm the next day.

“Then, while they were here, they asked if we could go up to the studio in London, with three of our girls, to take part in the programme.”

The footage, broadcast on Wednesday evening (10 February), showed The One Show’s broadcaster Michael Douglas at the Mac’s Farm, explaining the scale of commercial egg production and the need for depletion at 78 weeks.

The birds were also seen walking around the studio, where Breaking Bad actor Aaron Paul was the main guest.

The show ended with an appeal for anyone interested in the rehoming exercise to contact the charities Fresh Start for Hens or Brighton Animal Action.

Mrs Macmillan said she had had more than 100 emails and texts in response to the programme and was confident that the 9,000 bird target would be reached.

“Brighton Animal Action has another 3,000 lined up, so we’re well on the way.”

Once depleted, the shed will be cleaned and maintenance work carried out, with the next flock coming in in late May.