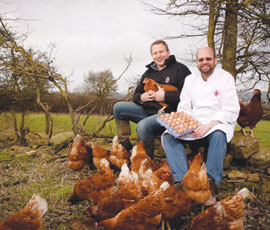 Blackacre Farm Eggs has announced its inclusion in The Chef’s Forum’s “exclusive” list of approved suppliers.

The Chef’s Forum is a networking group in the South West that connects chefs with food and equipment suppliers, as well as running education initiatives.

Dan Wood of Blackacre Farm Eggs, a former Farmers Weekly Poultry Farmer of the Year finalist, said the news was exciting. “The Chef’s Forum connects chefs with education and suppliers, and in turn education with suppliers and chefs, and we are really pleased to be a part of the group.”

Blackacre Farm Eggs will be inviting chefs, including Dorset’s only Michelin starred chef Russell Brown, and apprentices from South West colleges to its farm, and explaining free-range egg production, as well as hosting cooking demonstrations.

Catherine Farinha from The Chef’s Forum said: “We look forward to showcasing the versatility of eggs among our chef members and catering students across the South West. We plan to organise farm visits to Blackacre Farm for cookery demos with Russell and other great Dorset chefs.”