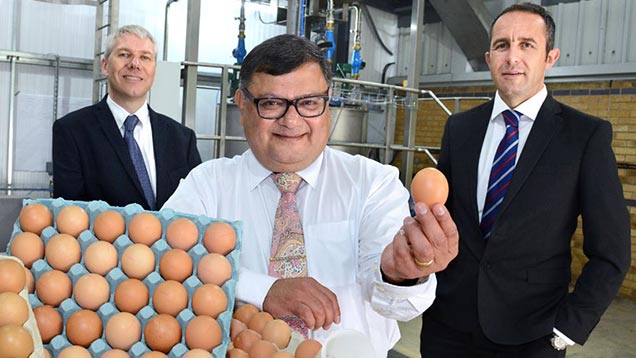 A company which makes ready-to-eat boiled eggs has invested in unique machinery that turns egg shell into purified calcium carbonate – a substance used widely as plastic filler and in fertilisers.

It has the potential to turn a waste product costing Leicester-based Just Egg around £50,000 a year in landfill fees into a profitable sideline to the main business.

See also: Steps to improve energy use on farms

Just Egg has worked with the University of Leicester to develop the novel process, which separates the inner membrane of the egg before grinding the shell into a fine powder.

And the company has now scaled up the new technique, developing machinery that can process the huge amount of egg the company uses.

The project used funding from the Midlands’ Food and Drink iNet project, and a £150,000 Natwest loan.

Pankaj Pancholi, managing director of the firm, said he was boiling between 1.2-1.5m eggs every week, and their shells accounted for 12% of his overall waste.

He believes the new equipment, which is patent pending, is the first of its kind in Europe, and perhaps the world.

The machinery is set to be commissioned in September, with initial produce set to be tested by plastics manufacturers for purity.

If it meets their standard, it could be a lucrative sideline for the firm – if not, calcium carbonate is a welcome raw material for arable farmers. “It’s heads we win, tails we don’t lose,” said Mr Pancholi.