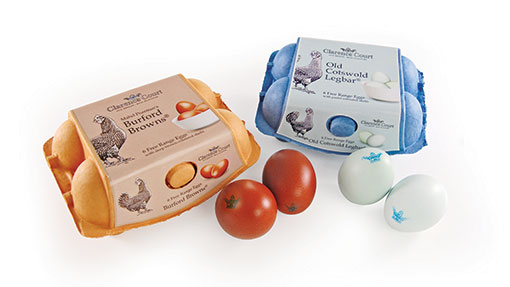 Waiting in reception at Stonegate’s Lacock packing station, one gets an immediate impression of the importance the company attaches to sales and marketing. Copies of The Grocer outnumber Poultry World by about 10 to one.

But with branded egg sales accounting for about a quater of turnover – far more than the industry average – that is not too surprising.

Stonegate’s choice of branded egg is certainly diverse, ranging from things like Ella Valentine baking eggs right through to “Six Pack” rugby eggs. And that’s before exploring the weird and wonderful world of Clarence Court.

The key to developing a successful brand, according to packaging and marketing manager Gemmah Garrison, is having a clear message and a unique selling point that is in tune with a specific market need. Initial market research is essential, as well as developing a production base that guarantees the authenticity of whatever the brand is seeking to deliver.

“The shopper spends so little time at the egg fixture in a supermarket, the egg box must be eye catching,” she adds. “Many of our brands are trying to appeal to a lifestyle choice, so they must stand out.”

Getting noticed is certainly one of the attributes of Ella Valentine baking eggs, launched in 2011 and sold through Sainsbury’s and Ocado in bright pink boxes.

“We were looking for a gap in the market,” says Ms Garrison. “We had eggs branded by production method, breed of bird and region, but we wanted something for occasional egg use, too. Given the growth in home baking, we saw an opportunity and so launched Ella Valentine eggs.”

This involved a £125,000 marketing campaign, targeting women in the 18-34 age range, designed to convey the “sheer pleasure of baking”. While sales are still relatively small, 50% year-on-year growth and a Compassion in World Farming Good Egg Award suggest that the brand is hitting its target.

At the opposite end of the scale is the “rugby range” of eggs. Stonegate acquired the Six Pack Welsh Rugby Union brand in 2010, with its takeover of Farmhouse Freedom Eggs. The tie-up ticked a number of boxes, including health and fitness, together with strong regional branding.

“We were one of the first food types to be involved with the rugby scene,” says sales and marketing director Chris Moreman. “Eggs are clearly big on protein, which fits in with the whole sport and fitness arena.”

With the Rugby World Cup set for 2015 in England, Stonegate sees great opportunities, and has recently secured a similar tie-up with the Twickenham-based Rugby Football Union.

As any marketing expert will confirm, most brands have a finite shelf life, so must be refreshed from time to time to maintain their appeal.

Stonegate’s Intelligent Eating Omega-3 free-range eggs are a case in point. The longest running of all the company’s brands – having been launched in 2004 – the product was starting to look a little tired.

But company executives were convinced that the interest in healthy eating was here to stay, so instigated a relaunch in 2012, introducing a fresher, cleaner look to the pack design and helping to fund in-store promotions to boost sales. The brand now accounts for 4% of all Waitrose egg sales.

Another brand – Respectful Eggs – has been less fortunate. Initially produced on Lincolnshire farms with solar and wind power, and claiming to have half the carbon footprint of standard free-range eggs, the product did not really take off, and has now been dropped.

Big and British eggs, aimed at the traditional breakfast eater, have suffered a similar fate.

But British Blacktail free-range eggs – a Waitrose brand supplied by Stonegate – have gone from strength to strength.

With very specific production standards, including smaller flock sizes and lower stocking densities, the eggs were initially branded as Columbian Blacktail. But this caused some confusion with consumers, explains Ms Garrison, so focus groups were set up and the name changed to British Blacktail, while the packaging was adapted to introduce brighter colours and additional regional messaging.

“The key was to ensure a powerful and attractive brand identity, to encourage loyal customers to keep coming back, while prompting new Waitrose fans to give them a try.”

When it comes to branded eggs, no one can boast a greater diversity than Clarence Court, the company launched by Philip Lee-Wolf in 1990 and acquired by Stonegate in 2004.

“While they are all produced to Lion scheme standards, all the hen eggs are stamped with a distinctive blue crown to mark them out as special,” says Ms Garrison.

The Clarence Court brand dominates the premium end of egg retail, with sales put at about £10.8m out of a total market estimated at £16m. Last year, the business grew by 21%, the fastest of any part of Stonegate.

“Catering is especially good for us, with 25% growth,” adds Mr Moreman. “We sell a lot into top London restaurants, and as the chefs move around, they take the Clarence Court brand with them.”

Clearly the eggs carry quite a premium. Waitrose is currently charging £2.25 for six Old Cotswold Legbar eggs – equivalent to 37.5p/egg. “We passionately defend the premium price point, though every product has a ceiling,” says Mr Moreman. “We try to reward our producers, as it is far more expensive to produce a branded egg than a standard egg.”

Having said that, the company will support price promotions on premium eggs in the supermarkets, but insists this comes off Clarence Court’s bottom line, not the producer price.

“Also, we don’t engage in ‘deep cut’ price promotions, but offer a bit to try and entice standard free-range egg consumers across. Experience shows that, once a promotion is over, branded sales tend to settle at a higher level than before.”