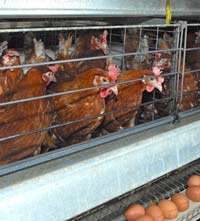 Compassion in World Farming has condemned a government advisory body for recommending a delay to the 2011 ban on beak trimming for layers.

In a recent letter to DEFRA minister Jim Fitzpatrick, the Farm Animal Welfare Council (FAWC) said implementing the ban itself could cause welfare problems.

Therefore, FAWC chairman Chris Wathes advised the ban “should be deferred until it can be demonstrated reliably under commercial conditions that non beak trimmed laying hens can be managed without a greater risk to their welfare than that caused by beak trimming itself.

“In the interim, there will still be a need for beak trimming. The Glasgow research results support our previous view that infra-red beak treatment appears to be the treatment of choice should beak trimming of laying hens be considered necessary.”

This method uses an infra-red beam rather than the older method of using a hot blade to cut the beak.

“We recommend that infra-red beak treatment should be the only method used routinely from a set date, such as January 2011.”

However, Prof Wathes highlighted that infra-red beak treatment can only be applied to day-old chicks, so other methods will still have to be available in emergencies, for example if there is an outbreak of feather pecking in a flock of hens that had not been beak-trimmed.

Responding to the recommendation, Compassion in World Farming chief executive, Philip Lymbery said: “FAWC are effectively advising leaving the issue of beak trimming open-ended. We cannot help seeing this as a way of kicking this badly needed reform into the long grass. More should have been, and must be, done.”

He urged DEFRA to maintain the 2011 commencement date for the ban on beak trimming. “We hope that a government that claims a high priority for animal welfare will not now reverse one of its key welfare achievements.”

What do you think about the ban on beak trimming? Have your say in our forum.