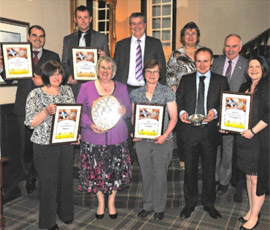 A “very high standard” was reported at this year’s Scottish Egg Quality Awards – the 25th anniversary of the competition – and a close call for judges.

A record number of entries were assessed based on their shell colour, egg weight, yolk colour, albumen quality, shell thickness, lack of meat or blood spots, external appearance and packaging.

“Those who were awarded certificates were very tightly grouped,” said Nick Sparks, who was part of the judging team from the Scottish Agricultural College. “It went very well, and the standards were very high.”

Professor Sparks added that many samples this year were close to the 600-point maximum, and only three points separated the first three places, which he said reflected the increasing quality of Scottish eggs.

Also cited was Lucy Miller who was placed third in the producer/retailer section with an organic egg sample.

Feed company BOCM Pauls organised the competition in which all egg samples were collected on the same day before being handed over to judges.

Keep up with the latest Poultry news