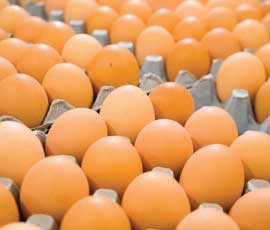 A couple has been convicted of a number of offences relating to food safety and trading standards, after it emerged that they were marketing eggs from caged hens as free range.

Stephen and Anne Hobbs, both of Three Legged Cross, Wimbourne, Dorset, were found by Trading Standards to have been buying-in eggs from caged hens and selling them at the front of their house.

A statement, from Dorset County Council said: “Hens could be seen roaming freely in their garden implying that the eggs were produced by their own flock.”

Bournemouth Magistrates’ Court heard that suspicions had been raised by a tip off that the couple were selling more eggs than their flock of backyard hens could possibly produce.

Officers carried out test purchases of the eggs, which were sold for £2.20/doz next to an honesty box, and found evidence that producer stamps had been removed.

Further enquiries revealed that Mr Hobbs had bought 1,200 eggs over the past three months from a supplier that was not identified. However, he maintained that these eggs had been sold at car boot sales and not at his home.

A case was brought and the couple pleaded guilty to one offence under the Food Safety Act 1990 of misleading consumers by the overall presentation of food. Dorset County Council said this related to selling “intensively farmed mass produced eggs from the site of their own small domestic free-range flock, with the producer’s marks having been rubbed off”.

The couple also pleaded guilty to two offences of misleading consumers by selling eggs with the producer’s stamps removed, that would reveal where they were from, (Consumer Protection from Unfair Trading Regulations 2008).

And they admitted to two offences of misleading consumers by selling eggs and failing to state where they were from, as well as one offence of not being able to identify their supplier of eggs.

In mitigation, they said that they were supplementing sales following a drop in their hens’ production in September last year, and had bought the eggs from a man who called at their door, who they were unable to identify.

“Anyone misleading customers undermines that choice and abuses that trust.”