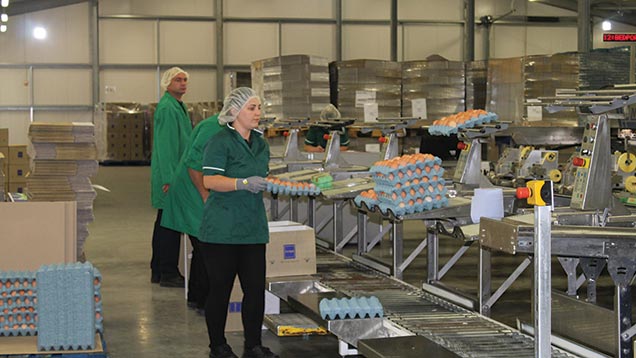 Business is booming at Blackdown Hills West Country Eggs. Although Ken and Deb Cottey only started keeping free-range hens in 2004, they have now got a thriving egg packing business, supplying the supermarket Aldi and a range of other local customers.

When Mr Cottey took over the family’s 37-acre former dairy farm at Buckland St Mary, Somerset, it took him three years to decide how to make it pay.

After visiting John Widdowson’s free-range egg farm in Devon, he erected his first hen house in 2004 and stocked it with 6,000 birds. The following year he built another two 6,000-bird houses, followed by a multi-tier shed for 16,000 birds in 2008.

“We had a contract with Deans Foods, which then became Noble Foods,” says Mr Cottey. “There was a bit of a culture change and like a lot of other local producers we no longer felt like we were our own bosses. That motivated us to set up a packing centre that would be big enough to pack other peoples’ eggs and go it alone. It’s been a complete whirlwind since then.”

During their three-month notice period, the couple tried to drum up business, visiting local shops, wholesalers and supermarkets – and landed a contract with Aldi to supply own label eggs to stores across the South West.

“They wanted all our production and another 10,000 birds’ worth, so we were instantly knocking on producers’ doors to get more supply,” says Mr Cottey. “The first few months were very hard, as we had to wait for producers to serve their notice periods, so had to buy from wholesalers to start with.”

The former egg store became the Lion-coded packing centre, with a little manual Ben Nevis grader, capable of packing three-quarters of a pallet an hour. “It was just before Christmas 2012, and we were up against it straight away, selling 30-40 pallets a week,” he adds. “So we brought our plans for a big packing shed forward and started building almost straight away.”

Having already visited a few large packing centres, the Cotteys had a good idea what they wanted, and managed to purchase a second hand Moba grader from Chippendale Foods at Harrogate.

Employing 16 members of staff, Blackdown Hills West Country Eggs now has six other producer suppliers, and three more ready to join up. “We are always looking to recruit new suppliers as we’re growing so much faster than anticipated.”

About 60% of trade is with Aldi, with other retail, food service and wholesale outlets making up the rest.

“One of the biggest challenges has been keeping up with the expansion, and not over-committing to ensure that we don’t let anyone down,” says Mr Cottey. “The grader we have is capable of processing over 500,000 birds’ worth of eggs, and we’d set a target to reach 250,000 within two or three years, but we’re approaching that already. We’ve got planning permission for another storage shed, so we plan to get a higher capacity grader within five years.”

At the same time as all this expansion, the couple have also got their eyes on growing their own egg production. “We can’t do a lot more on the home farm, so will be looking to expand nearby,” says Mr Cottey. “I’d like to at least double numbers, or maybe get to 100,000 birds. We are really passionate about producing top quality free-range eggs and we feel it’s important to be producing as well as packing.”

Getting that message across to customers is an important aspect of Blackdown Hills West Country Eggs’ marketing, he adds. “It also gives us the ability to plan when we put flocks in, to cover times of year when we could be short of production.”

Having done all the hard work themselves to start with, the Cotteys have now recruited Nigel Williams as their sales and marketing manager. “We really need to focus on getting the right people on board to help us move forward. We’ve now got our BRC accreditation and are approaching other supermarkets to supply regional eggs,” says Mr Cottey. “We’re advertising in trade and food magazines, and have developed the slogans ‘Taste the Freedom’ and ‘A cracking good egg’.”

Working on a 10-year return on investment, the plan now is to really grow the Blackdown Hills brand, as well as supplying retailers’ own-label eggs. “We want our suppliers to feel part of the brand, and ultimately to be recognised as the number one South West egg packer.”