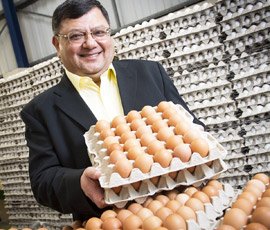 The Leicester firm – founded by microbiologist Pankaj Pancholi – processes up to 1.5m eggs a week, and supplies the food service trade, as well as a major retailer.

Just Egg has recently launched a hard-boiled egg individually packaged as a snack, following the success of a twin pack of boiled eggs sold directly by retailers.

“Just Egg Ltd has become what I believe is well placed in the hard-boiled egg and egg mayonnaise industry in the UK,” said Mr Pancholi.

“When I launched Just Egg in 2003, we had no customers. I employed 12 staff and I trained them from scratch. We now employ 24 people, and some of them have been with us since day one.

“We’re excited to be celebrating our 10th anniversary, and are currently working on plans to increase our range.”

Just Egg is also working with scientists at the University of Leicester to develop ways to turn waste egg shell into a filler for plastics, which My Pancholi hopes will one day be used to package hard-boiled eggs.

The company supplies its products to a major retailer, sandwich manufacturers and the pickling trade.