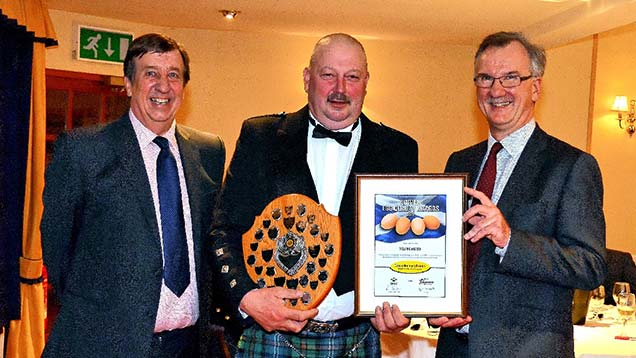 A record number of entries from the free-range sector added to the workload for the judges in the Scottish Egg Quality Awards, with more than 40 producers entering the competition this year.

Now in its 27th year, entrants’ eggs are judged according to a range of criteria, including shell quality and thickness, colour, albumen height, yolk quality and inclusions (blood or meat spots).

Entries are divided into three categories – organic, producer and producer retailer – with “commendations” for high performers in each group, as well as an overall winner.

Taking top honours in the producer retailer category were Brian and Lynda Blyth of D Blyth & Son from Leven, Fife. They stressed that their quality eggs were produced with customers in mind, not just for competition.

Also commended in this category was Kitty Campbell of Kitty Campbell’s Free Range Eggs, while Robert Chapman of Farmlay Eggs was ranked as “outstanding”.

Winner of the silver quaich (cup) for the best producer was Neil Munro of BQ Farming Partnership, Buccleuch. He said the success would give a boost to his production team.

James Baxter, vice-chairman of Bfrepa, who keeps 64,000 free-range layers at Leswalt, Dumfriesshire, was also commended in the category.

Meanwhile, Giles Henry of DG Henry & Co, Oakwood Mill Farm, Selkirk, took the overall title in the organic category. He said the award recognised all the hard work that had been put in to produce the best organic eggs. This was the second year organic eggs had been assessed.

The competition is jointly organised by feed manufacturer ForFarmers and the Scottish Rural College.

Lead judge Prof Nick Sparks said the entrants’ scores were closely grouped this year, indicative of the “high calibre of Scottish producers and the quality of their eggs”.