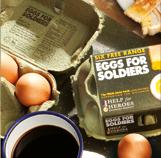 Noble Foods has launched a new eggs brand which will help raise money for the armed forces charity Help for Heroes.

The free range eggs, which will be sold with the label Eggs for Soldiers, will appear in Tesco from 4 April.

For every pack bought 15p will be donated to the Help for Heroes charity which supports wounded British troops.

The new pack has a military feel with a khaki background colour and an egg and soldier resembling a medal on the front.

Steve Horton, spokesperson for Noble Foods, comments: “We’re extremely proud to be working with Help for Heroes and we’re really excited about the new Eggs for Soldiers brand.

“We hope that people will see these packs and realise it’s so easy to support the brave men and women who, in joining the Armed Forces know that they may risk it all for our country.’

Noble Foods is also involved in the launch of another new egg brand which will raise money for farmers in Africa.

One Good Egg, organic free range eggs will be launching nationwide in April – in Tesco, The Co-operative and Ocado.

All of the profits from the sale of One Good Eggs will be used to fund community egg farming projects in Africa.

The eggs will be produced by selected British Lion and EU certified organic farms across the UK and packed by Noble Foods.