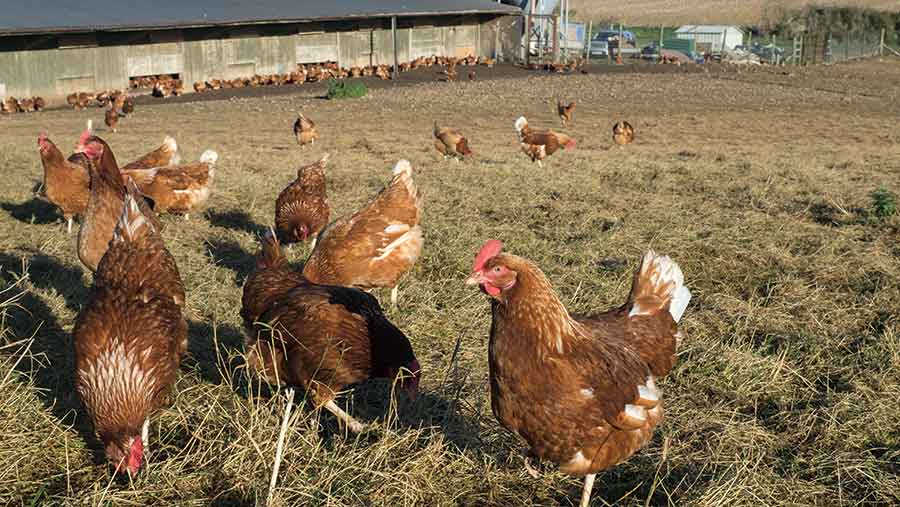 The free-range sector has enjoyed some substantial years of growth and profitability as the market has developed in recent years.

But there are fears that the market place is becoming crowded, which could lead to tumbling prices.

This concern led Doug Wanstall, who runs 10 laying and three rearing farms in an area stretching from Norfolk to Dorset, to take a Nuffield scholarship looking at how other countries are building resilience into their businesses.

After leaving college in 1991, Doug joined the family farm in Ashford, Kent, in 1994-95 as a fourth-generation farmer.

The farm was originally a beef, sheep and arable enterprise but Doug wanted to do something a little different and decided to enter a growing market where no subsidies were involved.

Expansion has been steady since 1996 but Doug is keen to see how he could further build the scale and profitability of his egg business by adding layer integration to improve margins and controls. 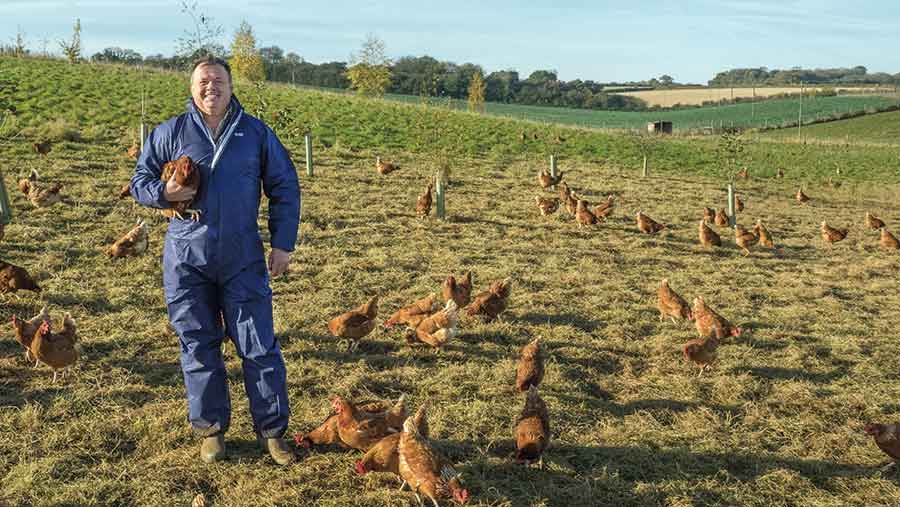 Doug is concerned about overproduction in the sector and is concerned of the dangers of eggs becoming just another commodity.

“We are in a period of overproduction now and while we should be able to cope this Christmas, prices will come under pressure next summer.”

With the retailers moving to cage-free systems, Doug is keen to know that the industry will look like post-2020.

It remains to be seen if retailers will take into account the sector of society that does not want to pay for free-range eggs and move to source from barn systems or go straight to free-range.

“I hope there will be another tier of egg production. We don’t want to end up being the lowest-value producers. We like our premiums and we have good experience producing quality free-range eggs,” he says.

Doug started off his Nuffield scholarship, which was sponsored by the South of England Agricultural Society, by meeting a series of economic experts, including former NFU chief economist Sean Rickard and the International Egg Commission’s Peter van Horne.

He wanted to compare the challenges the UK faces, with its relatively high cost of production, when compared with countries such as Brazil and India.

Doug visited a number of European countries, including Holland, where he was impressed with the efficient, good attention to detail, high-welfare, high-biosecurity family farms.

Although they were not often integrated, levels of production were “tip-top” and there were low mortality rates.

He also visited Germany, Austria and Belgium, looking at welfare issues, particularly at how producers were dealing with beak-trimming bans.

While farming minister George Eustice has postponed our own beak-trimming ban following some disturbing trial results, Austria manages it well by having small flocks, a high-fibre diet and lots of enhancements, including footballs and plastic bottles.

“It can work in small flocks, but it will be a struggle in larger flocks. However, as breeding gets better, we will get better,” he said.

While there are some substantial marketing issues facing Australian free-range producers, including defining stocking densities and farm assurance schemes, he was impressed with the financial resilience of producers – often in the face of appalling natural disasters.

“They don’t borrow too much money and all get together to support each other,” he said.

In New Zealand, Doug spent time with the integrated dairy company Fonterra, which is one of the nation’s largest exporting businesses.

While the monopoly it has in milk would be frowned upon in the UK, it has built a very strong and highly resilient business, making “shed loads” of money for its shareholders as well as developing excellent exporting opportunities.

He was impressed with the clear career progression in the dairy sector: “People tend to start off as a lower end share milker. They don’t own anything but milk and manage the cows and get a profit share.

“They then move up the chain to become a share milker and own some of the cows. Further up the ladder, they are given more equity but with that comes more risk.”

“I would rather share our success but we need to have success to share and we need to do more in our poultry sector to get and maintain quality staff.”

Although the New Zealand egg market is less strong, it has cleverly copied our Lion Code and Freedom Foods assurance scheme. Welfare, hygiene and biosecurity standards are very good.

Doug spent time with Zeagold Quality Eggs, New Zealand’s leading egg producer, which is vertically integrated to ensure control of the complete process from the production of feed and rearing of day-old chicks through to the manufacture of the final egg products and marketing to Papua New Guinea and the South Pacific states.

Doug was lucky to join the Nuffield Poultry Group (all ex-Nuffield scholars) on a week’s visit to Indonesia.

“The industry is split between, on the one hand, small, backyard flock guys who sell eggs for the “wet market” – anything up to 300doz/day and massive integrators – Charoen Pokphanol and Wonokoyo.

Charoen Pokphanol (CP), which also supplies Thailand, China and Malaysia, is involved in parent stock breeding, has hatcheries, rearing and laying farms, feed mills and a veterinary service, as well as having its own retail outlets, so is in control of supply and demand, and its own retail outlets.

The Wonokoyo group, started more than three decades ago by a tailor is a fascinating story, says Mr Wanstall.

It has gone down the same integrator route as CP without the retail stores but instead has its own abattoir and processing plant, making chicken nuggets.

“While the slaughter plant is probably about 10 years behind standards in the West, the processing plant was incredibly high-tech.

Mr Wonokoyo spotted an opportunity in 1983, believing that poultry was destined to help with the development of the nation and has reaped the rewards under the banner of honesty, discipline, responsibility, spirit, leadership and progress.”

Doug’s Nuffield journey ended in the United States, where he visited a range of producers, who while being excellent farmers, were surprisingly not particularly integrated.

The US is also moving to cage free by 2025 but again this is undefined. Visiting a one-million-bird cage producer in Delaware, who is moving to aviary production, Doug was struck by the fact that most of the US population were not interested in free-range.

“Apart from a few people living on the east and west coasts, about 95% don’t care. They are looking for good, low value-eggs.

“The farmer is looking to move to tiered layers – three stories of about 80,000 birds per layer but has said he hasn’t got round to moving his business to become more integrated.”