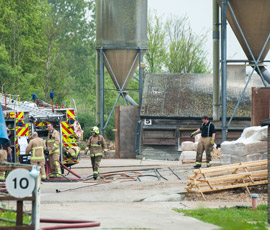 An estimated 300 birds were killed when fire broke out at a broiler farm in Essex earlier this week.

At about 9.20am on Monday (20 May), Essex Fire and Rescue were called to Elmwood Farm, Tiptree, following reports of a chicken shed on fire. On their arrival they found a shed measuring about 80x20m, which was 30% alight.

Press access was not permitted to the site due to safety concerns, but a spokesman for the farm said the sheds each held about 6,000 birds and the fire started in an office area between two of the sheds.

He declined to say how many birds perished in the blaze, though Essex Fire and Rescue put the death toll at about 300 birds. An investigation into the cause of the fire will now take place.