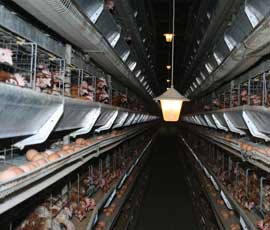 International banks and credit agencies – financed by EU member states – are issuing loans to agricultural businesses across the world, which fall short of minimum EU welfare standards, a new report has revealed.

Some of these companies are then able to export produce into Europe, creating concerns over competitiveness.

The report, produced by Humane Society International, Compassion in World Farming and Four Paws, cited a number of packages that had helped finance the building of conventional cages for hens and supporting businesses that housed pigs in sow stalls.

The International Finance Corporation (IFC) pools funds from 184 countries, including the UK, to invest in private companies in developing states.

The report pointed to Chinese pig producer Muyuan Foodstuff, which has received nearly $30m (£19.3m) in investments from the IFC to double its production capacity to 1.35 million pigs a year, “while continuing to confine the majority of its breeding pigs in sow crates (stalls)”.

Another example was the use of export credit insurance, issued by Euler Hermes but underwritten by the German government. The report found €40m (£34m) had been granted for the construction of conventional, colony cage systems over the last four years that are banned in Europe.

One of the companies that benefited from this insurance is Avangard, which accounts for more than 75% of Ukraine’s egg product exports.

There is currently a free trade agreement being negotiated between the EU and Ukraine that would reduce import tariffs for the country, which EUWEP (European Union for Egg Packers) has warned could undercut domestic egg prices.

The groups that compiled the report have called for investment institutions to adhere to European animal welfare standards.

Chetana Mirle, director of farm animal welfare for Humane Society International, said: “Money from EU citizens has no business winding up in the pockets of farmers who don’t meet EU standards for the treatment of animals.

“Public money of EU countries is used to support the establishment of housing systems in third countries that are outlawed in the EU.

“This merely transplants the objectionable practices from the EU to developing or transition countries, and may contribute to the competitive disadvantage of EU farmers who are required to meet higher animal welfare standards.”