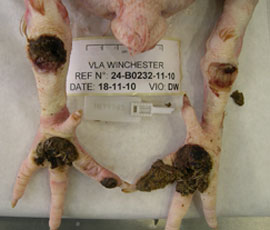 A farmer in Dorset who shipped birds with severe pododermatitis and breast burn while pretending to be part of the Assured Chicken Production program has pled guilty to 15 offences relating to poor animal welfare and misleading advertising.

R & J Farms Limited and its director, John Riddell, 56, of Merriot, Somerset were given a three year Conditional Discharge, meaning if no further charges are brought in the next three years no conviction will be recorded. The farm was fined £1,960.

Weymouth Magistrates’ Court heard in September 2006 that, out of a shipment of 21,000 birds delivered to a processing plant in Tamworth-in Arden, Warwickshire, many had severe pododermatitis.

R & J Farms Ltd and Mr Riddell pled guilty to 12 offences under the Animal Welfare Act 2006 of causing unnecessary suffering to chickens by failing to deal with skin burns and two offences under the Welfare of Animals (Transport) (England) Order 2006 of moving chickens not in a fit condition for the journey.

The court heard the farm had recently taken over the area where the birds were raised and had suffered from disease outbreaks and the general poor condition of premises and since the incident it had invested in ventilation and left sheds empty while cleaning.

“Our primary welfare aim is to avoid any suffering to farmed animals and advise on prompt appropriate action, with the help of the government vets we work with,” said Ivan Hancock, Trading Standards Manager for Dorset County Council.

“We will however continue to take enforcement action where appropriate against those who have failed to maintain what are viewed as acceptable minimum standards, and failed in their responsibilities to their animals’ welfare.”