In this week’s inagural wrap up of the world of strange poultry news we’ve got violent assaults, complaining NIMBYS, and bear fuelled drama.

In Naperville west of Chicago a man allegedly slashed the face of a friend for burning his chicken dinner.

The Naperville Sun reports Andre L. Poole is being held on charges of aggravated battery causing great bodily harm and resisting police after he slashed the friend’s face in three places after he burn the dinner which was cooking on a stove at his home.

I’m sure his defence will be that he had a moment of clucking madness. Oh that pun is worthy of a GBH charge.

Next up residents in Anchorage, Alaska are being told to secure their poultry coops against attacks by marauding black bears.

The Anchorage Daily News has reported that as increasing numbers of people embrace backyard poultry attacks on the outskirts of town have increased, with many of the bears being shot by residents, police or rangers.

Chicken keepers are being told to secure the coops with stronger traditional fences and more powerful electric fences while also keeping bird feed secured in order to keep bears away.

Having a black bear raid your chicken coop really puts our problems with foxes in UK to shame. 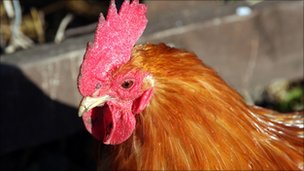 Meanwhile in Cornwall residents are fighting to stop whinging newcomers to the village of Probus silencing their local cockerels after complaints were made over daytime noise.

The BBC says 1,050 signatures have been collected by campaigners supporting the right of villagers to own cockerels.

Local councillor Barry Wilcox said the local authority should be unforgiving when it comes to newcomers complaining about rural sounds.

Well that’s the weird and the wonderful world of poultry for this week but if you’ve got a strange story for the Forager twitter (@featheredforage) it to us or email on poultry.world@rbi.co.uk