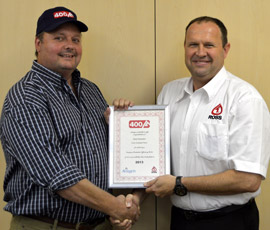 David Kynaston has become the first recorded broiler grower in the UK to score an European Production Efficiency Factor (EPEF) of more than 400 on two successive crops on the same unit.

The EPEF of a crop is a formula that uses daily weight gain, mortality and feed conversion to provide a figure that can indicate a flock’s overall performance.

His achievement at Four Crosses Farm, near Oswestry, was recognised this week (31 July) when he was presented with an award by Aviagen’s Glenn Bushell. The EPEF scores of 411 and 404 using the Ross 308 are just the 17th and 18th crops in the UK to join Aviagen’s “400 Club”, which recognises high performing broiler producers.

“To achieve a score of 400 is exceptional,” said Mr Bushell. “It needs everything going your way, and is ultimately down to the management of the farm.”

The ceremony, at feed supplier Lloyd’s Animal Feeds, near Oswestry, was also attended by representatives from the three hatcheries that supplied the birds, PD Hook, Faccenda and Annyalla Chicks.

These were the first two crops through after Welshpool-based Mr Kynaston took over the rented unit in April, retaining existing managers Simon Whitley and Mark Rhodes. The unit has a total capacity of 90,000 birds across four sheds built between 1984 and 2000, and supplies Highbury Poultry.

“It’s just a normal poultry site,” said Mr Kynaston. “We don’t do anything fancy, it’s just attention to detail. You need to understand why you’re doing something, and not just do it because you’re doing it.

“But it’s not me. It’s mainly my two managers, because they’re there all the time. It takes a lot of work and a lot of hours. If you do everything 2% better it adds up to a great deal.

“And all we can do is try and do the basics well. We rely on PD Hook, Annyalla and Faccenda to put in the best possible chicks, plus the support we get from Patrick Nicholls at Highbury, and the feed from Lloyd’s.”