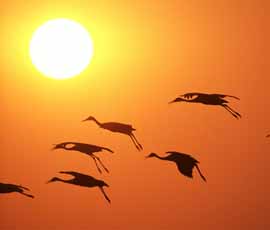 La Nina weather patterns in the eastern Pacific could increase the likelihood of flu pandemics, US scientists have revealed.

Research has discovered that the last four pandemics all occurred after La Nina events, when temperatures drop across the surface of the eastern Pacific Ocean. Scientists believe this can result in flu-carrying birds changing their migratory patterns.

Pandemics occur when two existing strains infecting an animal, such as a pig or bird, exchange genetic material.

Although the link between flu pandemics and La Nina events is still unclear, research shows wild birds’ patterns of flights and stopovers during migrations differ between El Nino weather events and its cold cousin La Nina.

“Our best guess is this brings together birds that don’t otherwise mix, and that allows the genetic reassortment to take place,” Professor Jeffrey Shaman from Columbia University told BBC News. However, many other La Nina events have not seen flu strains spread, which indicate other factors must be involved.