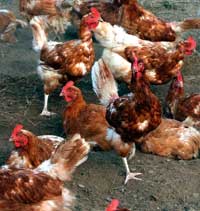 The poultry sector needs to develop housing systems that allow for natural foraging behaviour in order to reduce the incidence of feather-pecking, according to recently-published research.

“Providing forages to birds is likely to decrease feather-pecking the most, as it is generally thought that feather-pecking stems from redirected foraging motivation,” says the study, conducted by poultry experts in Scotland and Canada and published in the Universities Federation for Animal Welfare journal.

“Other types of enrichment, such as dustbaths and novel objects, have also been shown to reduce feather pecking.”

But the report notes that there is little comparative information available on the effectiveness of different types of enrichment. “It is not clear if the provision of forages decreases feather-pecking more than the provision of dustbaths or the exploration of new objects.”

Past studies into different types of enrichment have used birds of different ages reared in different environments, making comparisons between the various studies unreliable.

To address this, researchers at the Avian Science Research Centre at the Scottish Agricultural College and at the Department of Animal and Poultry Science at the University of Guelph, Canada, devised a series of experiments using uniform groups of birds in carefully controlled environments.

White Leghorn hens, 14 weeks old and known to be “feather-peckers”, were distributed in groups of four or five in 48 pens, with ad-lib feed. The birds were then given each of four separate treatments – forages, novel objects, dustbaths and “no enrichment” (see panel at bottom of page).

The birds were given three separate sessions of every treatment, applied on alternate days so as to give the birds a “day off” between treatments. Each group was observed closely, with the researchers counting both the number of feather pecks and the number of pecks to the enrichment itself.

“Feather-pecking levels were highest where no enrichment was provided and, as predicted, lowest where forages were given,” said the researchers, who also noted that the type of forage used made little difference to the overall level of feather-pecking.

Dustbathing and novel object enrichments also led to reduced levels of feather-pecking, somewhere in between the “no enrichment” and foraging categories, (see graphs).

The researchers also observed that the number of pecks the birds directed towards the forages and the dustbaths were similar – more than at the novel objects – suggesting that they were used in similar ways.

“As forages were most effective at decreasing feather-pecking, while appearing to be just as attractive as dustbaths, this adds evidence to the hypothesis that feather-pecking stems from re-directed foraging motivation,” says the report.

The researchers did, however, question whether the improvements would be sustained in the long term, and noted that none of the enrichments on offer eliminated the problem altogether. “The inability to abolish abnormal behaviours is a common weakness of environmental enrichments.”

But overall the studies showed that forage enrichments were particularly effective at alleviating feather-pecking.

“Severe feather pecking is an abnormal behaviour found in laying hens… and is an ongoing problem in the poultry industry, as removal of feathers is painful and bleeding associated with feather loss can lead to cannibalism,” says the study.

“The most common method used to manage this is to trim the beaks of birds, making feather removal more difficult. However, the beak trimming procedure has been associated with acute and chronic pain in chickens and is itself a welfare concern.”

The scientists therefore conclude that “attempts should be made to develop poultry housing that allows for natural foraging behaviour. Following this, providing any kind of enrichment will increase bird welfare and is therefore still beneficial.”

* “The effects of four types of enrichment on feather-pecking behaviour inlaying hens housed in barren environments”, by LM Dixon, IJH Duncan and GJ Mason is published in Animal Welfare, the journal of the Universities Federation for Animal Welfare.