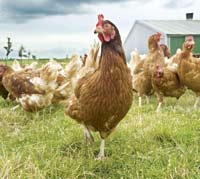 Free-range egg farmers are to help fund on-farm trials in an attempt to resolve the continuing debate over external stocking rates.

Back in early 2009, the British Egg Industry Council amended its code enabling free-range egg farmers to double the external stocking rate to 2000 birds/ha. The aim is to allow farmers to meet growing consumer demand for British free-range eggs.

It is still below the EU egg marketing regulations, which allows a density of 2500/ha.

At that time, BEIC chief executive Mark Williams, explained: “It was an important decision in the light of still-growing demand for free-range eggs. With the looming 2012 conventional cage ban, we needed to start the process of bringing more free-range egg production on board to meet the anticipated increase in demand.”

It means producers limited by land area can have more birds in the same free-range area. It is a quicker process to get planning permission to add buildings to an existing unit than starting from scratch for a new site, so boosting production in the shorter term.

However, RSPCA Freedom Foods has so far refused to adopt a similar increase in its rules, saying that it needed to see evidence that there will be no detrimental effect on animal welfare. This is significant as RSPCA Freedom Food assurance is required by many retailers.

To help convince RSPCA Freedom Food, the British Free Range Egg Producers Association has agreed to share the cost with Noble Foods of a project looking for evidence of any adverse effect of the higher stocking density on welfare.

Under the project, scientists at Bristol University will gather information from trials taking place on three Noble Foods farms, all stocked at 2000/ha.

BFREPA chairman Tom Vesey said: “We need to get this done as soon as possible. Speed is of the essence because it takes 18 months from deciding you want a new shed to getting the birds in.

“We haven’t much time left because we are rapidly approaching 2012,” he said.