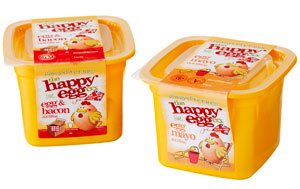 The Happy Egg Co is releasing a new range of egg-based deli fillers as part of its ongoing product development.

The range will consist of two variants: egg mayonaise and egg and bacon sandwiches.

The latest launch follows on from the release of their Happy Egg-branded quiches and scotch eggs last year.

“We have conducted extensive consumer and retailer research to help us gauge which products they would like to see from The Happy Egg Co and the egg inspired deli fillers were a popular choice,” said head of brands, Rob Newell.

“We are looking at entering even more categories, that traditionally haven’t included a free-range egg product, as we feel The Happy Egg Co could add real value to these categories and drive demand for free-range eggs generally.”

The deli-fillers will be available from Tesco stores later this month for £1.69.