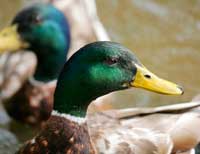 The avian flu virus may be a sexually transmitted infection in ducks, therefore, explaining the seasonal peaks in outbreaks during the breeding season.

Lethal strains of the avian flu virus, such as highly pathogenic H5N1 can evolve from the various harmless versions circulating in wild bird populations and then jump to other species, such as commercial poultry.

Investigations into avian flu have so far focused on this conversion as well as the global circulation of these strains.

They have shown that wild waterfowl, especially ducks, are a major reservoir and are, therefore, a key source of virus strains that can become highly pathogenic in commercial poultry. However, little is know on how the virus actually spreads in waterfowl.

This prompted Gergely Hegyi at Eotvos Lorand University in Budapest, Hungary and his colleagues to investigate breeding and they found a possible role of sex in the spread of the virus, as highlighted in a recent article by New Scientist.

The researchers think that mating may spread flu by pushing water contaminated with the virus onto developing eggs and so infect chicks before or during hatching.