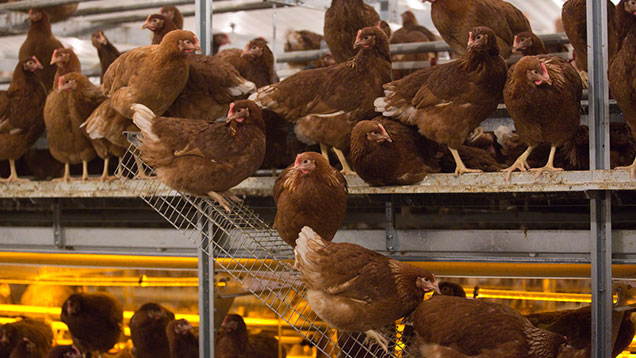 Northern Ireland has suspended the general licence for imports of poultry products and live birds from Britain following an outbreak of avian influenza in Lancashire.

The Department of Agriculture and Rural Development (Dard) Northern Ireland made the announcement after the H7N7 strain of the disease was found on an egg production farm near Preston.

As a precautionary measure, the general licence for import of live poultry, poultrymeat, poultry products, or hatching eggs from Britain into Northern Ireland.

Anyone wishing to import poultry products or live birds must apply to Dard for a specific licence.

Northern Irish agriculture minister Michelle O’Neill said her staff have been in direct contact with key poultry industry representatives and stakeholders in Northern Ireland to advise them of the situation and to call for increased vigilance.

“While the situation will be kept under review, I would encourage bird keepers, as a precaution, to revisit their own biosecurity,” she added.

“We have informed our counterparts in the South of the situation and will continue to work closely with them to ensure that we apply consistent and proportionate measures to protect the island of Ireland.”
Robert Huey, Northern Ireland chief veterinary officer

Defra has established a 10km surveillance zone and an inner 3km protection zone around the poultry farm, owned by Staveley’s Eggs at Goosnargh, north-east of Preston, Lancashire.

Government officials have been culling more than 150,000 laying hens at the farm following the outbreak.

Robert Huey, the chief veterinary officer for Northern Ireland, said he had been liaising with Defra and other vets in England to see if any additional local control measures were required at this time.

“We have informed our counterparts in the South of the situation and will continue to work closely with them to ensure that we apply consistent and proportionate measures to protect the island of Ireland,” he added.

Public Health England said the risk to public health from the H7N7 strain, which can infect humans, was very low. However, it is not the the H5N1 strain which has killed hundreds of people worldwide.

Meanwhile, the Food Standards Agency (FSA) has insisted there is no food safety risk to consumers.