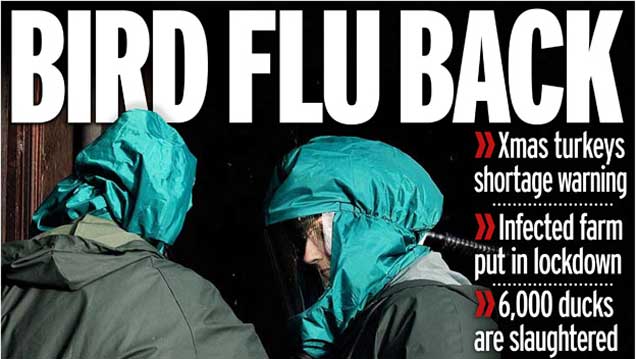 For almost all the newspapers, the threat to the supply of Christmas turkeys posed by this latest outbreak of avian influenza is the one concern they have chosen to highlight.

None take it further than the Daily Star, which suggests the virus could “wipe out” seasonal fowl altogether. The Daily Mirror splashes the same sentiment across its front page, which features a picture of officials in protective gear at the farm near Driffield, north-east Yorkshire.

The Daily Mail places the focus very much on Cherry Valley, the company supplied by the farm. It says it has approached every supermarket the company supplies and all had confirmed they do not stock meat from that particular unit. This is of little surprise given the fact that the affected operation is a breeder farm.

A message that has been pressed home by almost all commentators from within the poultry industry is that poultry is safe to eat. It has been widely repeated in all coverage of the outbreak. The Telegraph puts it in the headline of its latest coverage and it features in the introduction of the Guardian’s.

Both the Financial Times and the Times raise the question of why poultry movements were banned across the entire Netherlands but “only” within a 10km exclusion zone in the UK. The Times quotes the British Poultry Council, which suggests such a move would be inappropriate, in the UK as the Netherlands was a smaller country with a far denser concentration of poultry.