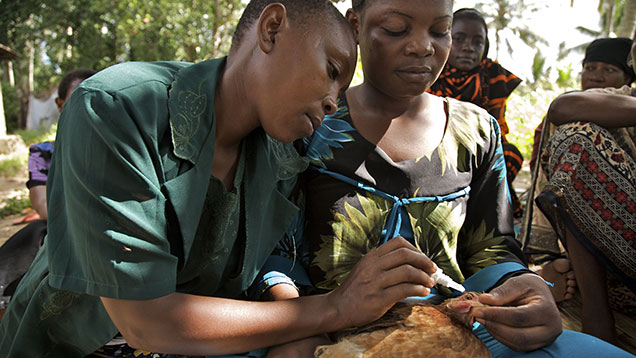 The UN’s Food and Agriculture Organisation (FAO) has launched a US $20m (£12.86m) emergency appeal to try and increase the resources for controlling highly pathogenic avian influenza in West Africa.

A statement from FAO explains the H5N1 strain has been spreading rapidly in the region so far this year, especially in Nigeria, Burkina Faso, Niger, the Ivory Coast and Ghana, with serious economic and human health consequences.

Without timely interventions, further spread across the region and beyond is inevitable, it warns.

“Avian flu could trigger a mass die-off of chicken – a nutritious and inexpensive source of food for many people – with detrimental impacts on diets and on the economy of the region,” said a statement.

“Urgent action is needed to strengthen veterinary investigation and reporting systems in the region, and tackle the disease at the root, before there is a spillover to humans.”
Juan Lubroth, FAO

The FAO is also concerned that the H5N1 strain is capable of causing illness and fatalities in humans, which could add to the misery already caused by ebola in the region.

“Based on what we do know, there is a real risk of further virus spread.

“Urgent action is needed to strengthen veterinary investigation and reporting systems in the region, and tackle the disease at the root, before there is a spillover to humans,” said FAO animal health chief, Juan Lubroth.

To this end, the agency is calling for $20m, to bolster weak veterinary systems, improve local laboratories and step up control methods, such as culling, disinfection and carcass disposal.

The FAO notes that poultry production has grown steadily in West Africa in the past decade – increasing 60% in the Ivory Coast, for example.

But regulatory systems have not kept pace and, in a region of 330 million people, there is an acute need to make market chains safer.

The risk of H5N1 spreading beyond the region is also a concern for European poultry producers.

At a recent conference organised by the Global Alliance for Research on Avian Diseases in London, Ian Brown, head of virology at Animal and Plant Health Agency, warned of lateral spread of H5N1 from Africa.

In Egypt, in particular, there has been a massive spike in the number of human cases and the disease had spread into neighbouring countries, as well as West Africa.

The re-emergence of H5N1 in Nigeria this year for the first time since 2008 was probably the result of illegal trade, rather than bird migration, he suggested.