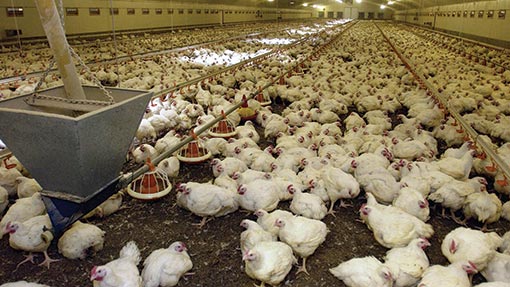 Once campylobacter gets into a flock it spreads like wildfire, and there is an increasing link between bird health and its succeptability, according to Prof Tom Humphrey of the University of Liverpool.

Prof Humphrey has had a long career in microbiology, studying zoonosis. He was behind the drive for salmonella vaccines in laying hen flocks and, as the health challenge of the day moved on, so has his research.

Campylobacter is now an area of specialism, but solving it is not going to be quite as straightforward as getting salmonella under control. “I believe we will get there with campylobacter, but I think it’s become a rather longer journey than we thought it was going to be – and a far more complicated one.”

He explains that complexity lies in the mutability of campylobacter. It is able to take up DNA from other bacteria, grows rapidly and its composition develops lots of “mistakes” along the way, meaning the bug has huge variability. This makes creating an effective vaccine incredibly tricky, according to Prof Humphrey.

It’s also found in most animals and is endemic in the environment, but poultry is considered the number one source for infection in humans. Prof Humphrey estimates about 750,000 people a year are taken ill in some way.

Although poultry is the main vehicle for infection, the bug can also be picked up in drinking water, lakes or streams, contaminated fields, puppies or kittens and unpasteurised milk. A long incubation period – between three and 10 days – makes it difficult sometimes to discover the exact source.

It has not been definitively established what causes chickens to become colonised with campylobacter, says Prof Humphrey, but once a single bird has passed the bacteria through its digestive tract, it will multiply and spread incredibly quickly through the rest of a flock.

Some researchers have suggested vertical transmission from parent stock, but that “doesn’t seem to be the case”. Having poultry sheds near cows, however, is one known way to increase risk.

Although biosecurity may help, it is “very difficult to maintain every minute of every day,” says Prof Humphrey, and there is some indication that it is not totally effective even when in place.

There are increasing links between the health of a flock and whether it tests positive for campylobacter, according to Prof Humphrey. Both E coli and foot problems such as hock burn and pododermatitis seem to correlate with a flock testing positive.

“The organism first colonises animals that are more vulnerable. Once that process has been completed, and the campy has come out the other end, it can spread around.

“If you pass a campylobacter through a chicken, its ability to infect another chicken is much higher – that explains the ratchet between bird health and welfare and campylobacter.”

The idea that campylobacter is commensal – harmless or even helpful to the gut – in chickens is also not accurate. “It’s not harmless, it’s controlled. They stay where they are in the gut because the immune system recognises them as a potential threat.”

This was found in a study where birds were fed either a commensal lacobaccilus or a campylobacter bug, with campy initiating an immune response that the harmless bacteria did not.

Increasingly, campylobacter is now causing performance problems in poultry, suggesting that it can make birds ill, especially if there is another health challenge in the flock. “With some birds and some strains of campylobacter, the animals seem to have almost a human-like response: they get diarrhoea.”

It’s no surprise that campylobacter has been listed as the number one concern for the Food Standards Agency – it can cause long-term, serious health concerns in a small percentage of human cases.

The bug has been attributed to people developing wheat or gluten intolerances, or other permanent dietary disorders and can even damage the autoimmune system. Other long-term problems associated with campylobateriosis include reactive arthiritis, eye damage, irritable bowel syndrome and progressive paralysis.

Those that are luckier can expect several days of abdominal pain, nausea and diarrhoea before symptoms clear up on their own.