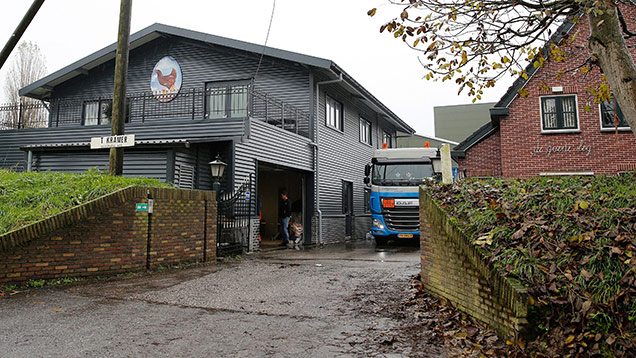 The exterior of the poultry farm in the village of Hekendorp, where a a strain of bird flu that can jump the species barrier to humans was identified. Bas (c) Czerwinski/AFP/Getty Images

Dutch poultry producers are looking at losses of up to €100m as a result of trade restrictions on poultrymeat for sale outside the EU, reports Farmers Weekly’s sister magazine  Boerderij.

As a consequence of the highly-pathogenic avian influenza outbreak affecting a 150,000-bird layer farm south of Amsterdam last weekend, a number of third countries – including South Africa, South Korea  and Ukraine – have already imposed import bans.

These exports markets will be closed for at least the next three months, Jan Odink, chairman of the Association of Dutch Poultry Processing Industries (Nepluvi), told Boerderij.

Approximately 25% of the total Dutch exports is sent to destinations outside the EU, Eurostat figures show.

Prices for poultrymeat and breeding eggs in the Netherlands are likely to go down on the short term.

Total damage may be as high as €100m, said Gert Jan Oplaat, chairman of the Dutch Union of Poultry Breeders.

Following the outbreak, the Dutch authorities imposed a total ban on all poultry and egg  movements within the country for 72 hours.

This has now been lifted after tests showed no other farms in the 10km surveillance zone had contracted H5N8 avian influenza.

But movement restrictions inside the zone remain in place.