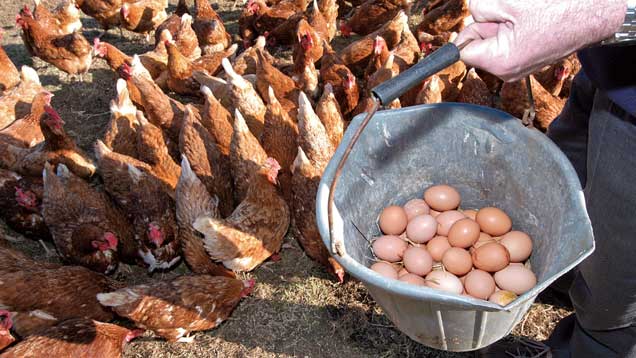 Egg producers located in the avian influenza restriction zones in East Yorkshire say they are facing a rapid build-up of eggs and manure on their holdings due to on-going movement restrictions.

Tim Warkup has 30,000 free-range layers on two sites about four miles away from the infected duck farm at Nafferton, near Driffield, and is well within the wider surveillance zone.

“We already maintain strict bio-security, so not much has changed, apart from banning visitors and keeping the popholes shut,” he said. “The biggest problem is getting eggs moved.

“Noble want our eggs on fibre trays, and we’ve only got enough of them until the end of Wednesday (19 November). We could put them on plastic trays on Thursday, if we’re allowed, but by Friday we’ll be out of trays altogether.”

Mr Warkup’s other big concern is flock depletion. His larger flock of 16,000 birds is already 70-weeks-old and is due to be cleared out on 5 December. “At this stage we do not know if we will be able to move them, and if we can, will we be able to clear the muck out?”

Fellow egg producer Rick Dewhirst has a 52,000 bird colony unit and a 32,000 free-range unit within the tighter 3km protection zone.

“I first heard about the outbreak on the breakfast news on Monday (17 November), but had no further contact from anybody until I phoned Defra in the afternoon,” he said.

“As things stand, I’m not able to move anything off the farm, though we are able to have feed delivered.”

Mr Dewhirst says he has been quite fortunate in terms of egg build-up. “The free-range birds are just 19-weeks-old, so have not come into lay. The popholes are shut anyway, and as we have a multi-tier unit, they are confined to the system.”

The colony unit is still going flat out, though packer Chippendale Foods did manage a collection just before the movement restriction was put in place. “We’ve now got about a week’s worth of storage, so hopefully we may have a movement license by then.”

The bigger immediate problem was with manure, he said. “By the end of the week we’ll be crying out to get it shifted. Both our units have manure belts and we can’t let them get overly full, or the motors will not be able to move them.”

The colony unit is normally run twice a week direct into trailers for spreading on arable land, and the free-range unit once a week. “We could conceivably go another week without clearing it, but we are already seeing a build-up of ammonia in the sheds, which is not good for the birds.”

According to Defra’s Poultry Register, there are about 60 poultry keepers in the two restriction zones, though only those with more than 50 birds are required to register their flocks.

It is understood that there is one 2 Sisters broiler unit within the 10km surveillance zone, though the birds are currently 22 days old and do not need to be moved for another 10 days.

The company says it is on “amber alert”. “We are suspending all farm visits, including audits and farmer meetings, for the next seven days. All deliveries onto farms will be kept to an absolute minimum,” said a statement.

“In addition, all collections of chickens from eastern free-range and organic sites will now be on separate bespoke vehicles and dedicated catching teams, effective 18 November.”