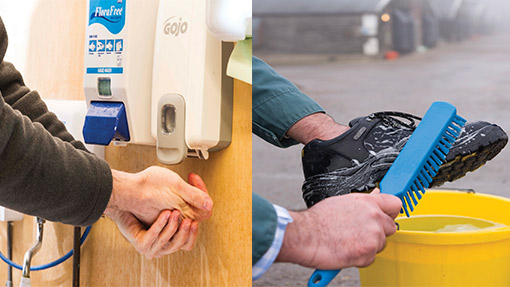 Reducing human infection from campylobacter is the Food Standard Agency’s highest priority – and that means farmers through to supermarkets must play their part.

The reason, according to Javier Dominiguez Orive, deputy veterinary director at the FSA, is simple: Each year in the UK there are 460,000 cases of campylobacter food poisoning, 22,000 hospitalisations and 110 deaths, costing the NHS an estimated £540m.

The bacteria is endemic in the environment, he adds, and can be caught from pets. But chicken is responsible for 60-80% of all human cases.

In the poultry shed

How campylobacter gets into poultry houses and spreads on farm has been a focus for the FSA.

“Birds from houses that are thinned are eight times more likely to be colonised at the end of the cycle,” Mary Howell, a senior scientific officer at the FSA told the conference. She pointed to the significant biosecurity risk that thinning presents, as well as the movement of modular crates. While these crates are routinely cleaned, this may not be done at a high enough temperature to kill the campy bug.

In addition to not thinning, Ms Howell also recommended sending evenly sized birds for slaughter by employing sexing and an effective culling-out policy as a way of potentially reducing campylobacter.

Veterinary consultant Jane Downes led a UK-wide on-farm project with the aim of demonstrating that biosecurity can work in controlling campylobacter.

“It is important for farmers to focus on producing safe food and not just see their chickens as animals,” she told the conference.

It was essential to ensure every house was treated as a biosecure unit itself, with separate clothing and equipment for each and every shed. Under the project, campylobacter levels were monitored on-farm and at the slaughterhouse, providing feedback for the staff. “Measuring outcomes provides an incentive to change and maintain standards,” said Ms Downes.

Michael Clark from the Minster Veterinary Practice reiterated the importance of on-farm testing. Boot swabs have been found to be a practical and efficient way of sampling, he said.

“Changing farm staff behaviour will take time, and missing a control step just once can let campylobacter in. Once in a house, 90-95% of birds become positive in two to three days.”

While much of the problem of campylobacter can be traced back to farms, slaughterhouse practices also play a major part.

Cross contamination by carcass washing is one issue and trial work using barbecue dust has investigated the effectiveness of different nozzle types and settings. A web-based tool has since been developed, allowing processors to learn which measures work for them and compare their performance with others.

Ms Howell also gave a list of “ideal” practices at processing, but conceded they could not be applied in every situation. She called for campylobacter to be a specific hazard in slaughterhouse HACCP plans, and slaughter to be at as even a size as possible.

Processors should also consider the effect of different stunning methods on bird cleanliness, maintain temperatures in the scalding tanks and minimise air flow during plucking.

There are also novel methods that might provide some help against campylobacter. For example, Jeremy Hall from Bernard Matthews has managed a project in which nitrogen is used to super-cool the surface of the skin, as carcasses pass through an inline tunnel.

In collaboration with the British Retail Consortium and Faccenda, extensive trial work has been carried out. “The first full-scale system is due to be installed this summer, with the capability of ensuring all poultrymeat can deliver on the FSA target for 2015, of 90% of carcasses with less than 1,000 CFU per gram”, Mr Hall told the conference.

A group representing the major supermarket chains is working on risks associated with different production systems, a biosecurity project and feed additive trials.

It is also involved in the validation of antimicrobial treatments and rapid assessment techniques, for example using cameras to monitor faecal contamination of carcasses.

Different packaging types used for chicken have been reviewed, as any leakage can cause cross-contamination.

Other innovations include “cook from frozen” and “oven-ready” packaging, which both contain the juices and maintain eating quality. This has been coupled with communications promoting the safe handling of poultry and proper disposal of packaging.

Campylobacter grows between 25C and 42C, and is killed at only 48C. Therefore, the main way food poisoning occurs is not through under cooking chicken, but contamination from raw meat. Poor hygiene practices during preparation result in bacteria being spread around the kitchen and on to utensils.

This is why the focus of the FSA’s “Food Safety Week” this year will be on highlighting the risk that washing chicken presents. This message will be supported with advice on how to store, handle, prepare and cook chicken,” said Ms Howell.