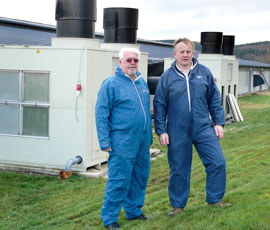 With the soaring cost of energy and the harsh start to winter, more poultry producers are considering investing in heat exchangers as a way of cutting their bills.

One producer who has recently taken the plunge is Ed Davies, who rears 350,000 birds at his Cottage Farm, Evenjobb in Powys on contract for Cargill. Pullets are thinned at 35 days at 1.8kg, while the cock birds are taken on to 45 days when they reach more than 3kg.

“I first came across heat exchangers when I was on a 7Y Services study tour to Holland early last year,” he says. “We were actually out there to look at biomass boilers and gasifiers, but it was the heat exchanger that grabbed most attention.”

On returning to the UK, Mr Davies investigated the options and eventually went for a Dutch ITB AIR2 system – the first producer in the UK to do so. Two modules were installed as part of a trial for the manufacturer in one of his eight sheds, housing 52,000 birds.

“I went for the ITB as it is relatively compact,” he says. “The two modules combined provide an airflow of 36,000m3/hour, which is what I need for the size of my shed, yet don’t take up a huge amount of space outside.”

Mr Davies has just completed his fourth flock with the new heat exchangers and, in terms of energy saving, the results have been good.

In the most recent crop, the shed with the heat exchangers used a total of 1987 litres of kerosene to heat the building during the first 27 days of the production cycle. The adjacent shed, with the same number of birds but no heat exchangers, used 4287 litres over the same period.

On this basis, the heat exchangers delivered a 54% fuel efficiency gain. With kerosene valued at nearly 60p/litre, that was equivalent to a cost saving of about £1400 over the 27-day period.

There has also been an electricity saving of about 5%, as the heat exchanger provides all the required ventilation for the first 23 days of the crop, meaning the conventional fans can be switched off.

But it’s not just about fuel savings, says consultant Mike Tyers of 7Y Services. “There should also be significant improvements in bird performance from installing a heat exchanger.”

In particular, the environment created is much drier than that produced by conventional heaters, which typically generate 8 litres of water for each litre of kerosene burned.

This drier atmosphere results in less litter being used, and a better environment for the birds, leading to reduced medication.

In addition, experience in Holland has shown that heat exchangers can deliver improved feed conversion efficiency and a reduction in the level of downgrading at the slaughterhouse.

According to Mr Tyers, a well set up heat exchanger should have paid for itself within five years, based on a 50% fuel saving and a 20% improvement in flock performance (see table).

Results from the four crops trialled at Cottage Farm have been mixed. There were several teething problems, though most related to the control systems used, with separate controllers for the heat exchanger and the existing ventilation system.

Balancing the two has been a steep learning process. “When the weather is cold and the heat exchanger is going flat out, it’s easy enough,” says Mr Tyers. “The same applies in the summer when it’s warm and the exchanger is switched off.

“The difficulty has been when the temperature is in between and both systems are in action together. It takes experience to get the balance right, so that fans, heaters and the heat exchanger do not compete with each other.”

Any future installations will integrate the heat exchanger into the existing ventilation controls.

Despite the initial problems, poultry unit manager Martin Thomas says there has been a marked improvement in the physical performance of the most recent crop, especially in terms of litter quality.

“We only needed one pallet of litter to top up in the shed with the heat exchanger, compared with two pallets in the other shed,” he says. “We also saved on medication; we suffered from less enteritis in that shed.”

There was also a 23% difference in the level of downgrading for footpad problems and heat burns between the two sheds, meaning more money from the processor.

However, Mr Davies is reserving judgement before committing to putting any further heat exchangers in his other sheds. “I want at least a year’s results before we can fully assess the impact on the birds’ performance,” he says. “There are so many variables at play, not least the quality of the chicks coming on to the farm in the first place.”

HOW THE SYSTEM WORKS 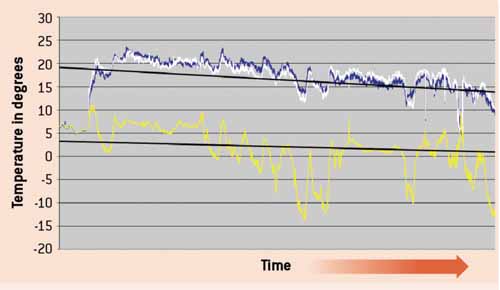 The ITB AIR2 draws warm air out of the building through two large exhaust vents and forces it vertically down through a mass of green plastic tubes, housed in a unit outside the shed, before it is expelled.

At the same time, fresh air is sucked in horizontally across the green tubes, picking up heat which is then blown back into the centre of the building to be circulated by smaller fans.

The dust and condensation is contained within the vertical tubes and everything flows to a chamber in the base, where a shallow water bath acts as a dust trap. Cleaning is from a hatch on top, with the wash water collected in the base.

As the graph shows, the lift in temperature achieved at Cottage Farm is typically between 10º-15ºC, though it has been as much as 25ºC.

The heat exchanger is able to make a significant contribution to the 32ºC initial temperature required for day-old chicks. It will also deliver all the fresh air requirement (approx 2000m3 per hour) for 52,000 birds.

By 28 days, the temperature requirement will have been reduced to about 22ºC, while the fresh air requirement increases to about 40,000m3/hour.

At this stage, the heat exchanger will still be providing the bulk of the warmth and fresh air, though the ventilation fans will be required to supplement the volume.

* The Clima Unit heat exchanger from Agro Supply in Thirsk is the most popular in the UK, with more than 100 units now out on farms. The company says it is currently installing eight units a week, with a 12 month money-back guarantee. The latest model, the Clima Unit 2, comes with self-cleaning jet mist technology. It delivers an average 53% gas saving, an extra 24g weight gain, and sheds need 85% less top-up litter, says the company. More information from www.agrosupply.co.uk

* A new Big Dutchman heat exchanger is available from Newquip in Northallerton. It offers a claimed reduction in heating cost of up to 60% and includes automatic dry filter cleaning during operation. No roof ducting means easier cleaning, improved hygiene and less weather damage, says the company. More information from www.newquip.co.uk

* The Draper Recirculation System uses a positive pressure design to ensure even temperatures throughout the shed, taking over the ventilation and heating demands for the first three weeks and at night. Fitted with hot water radiators, the system has delivered energy savings of more than 50%, with the potential to manage humidity, enhancing bird welfare and production. More information here.