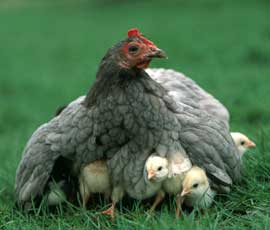 Domestic hens have been found to possess a degree of empathy – a trait previously only known to exist in humans – showing clear physiological and behavioural responses when their chicks are mildly distressed.

Researchers at the University of Bristol’s School of Veterinary Sciences conducted a series of experiments in which hens and chicks were subjected to puffs of air, at 30sec intervals over a 10min period.

Hens responded to the puffs directed at themselves with increased alertness, decreased preening and a reduction in eye temperature. Crucially, they also displayed the same response when the air was directed at their chicks.

Increased heart rate and maternal vocalisation also occurred among the hens when the chicks were subject to treatment, even though chicks themselves produced few distress vocalisations.

“The extent to which animals are affected by the distress of others is of high relevance to the welfare of farm and laboratory animals,” said research leader Jo Edgar.

“We found that adult female birds possess at least one of the essential underpinning attributes of ’empathy’ – the ability to be affected by, and share, the emotional state of another.”

The researchers said they used chickens as a model species because, under commercial conditions, they will regularly encounter other chickens showing signs of pain or distress, due to routine husbandry and/or slaughterhouse practices.

Compassion in World Farming chief executive Philip Lymbery said the research underscored the need to treat farm animals with compassion and respect “rather than caging, cramming or confining them on factory farms”.

• Have your say. Is this type of research good value for money? Join the Poultry Platform debate