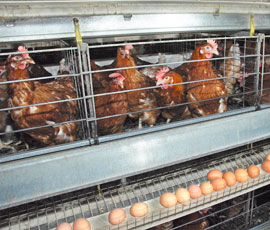 Egg producers in the EU may struggle to control salmonella following the EU ban on conventional cages, according to animal health company Anitox.

The need for caution was highlighted in a recent study in Belgium, which quantified the effects of housing systems in the spread of salmonella infection within layers and internal egg contamination.

The study found aviary and floor housing systems posed a greater risk of infection in comparison to conventional cages and enriched cages.

It was also found that bird-to-bird transmission of salmonella enteritidis was marginally higher, while a higher number of eggs were contaminated internally by salmonella.

“The results suggest a shift from conventional to alternative housing systems for laying hens should be accompanied by a keen concern for optimising salmonella surveillance programmes,” Mr Doyle said.

He added it was critical to maintain existing control plans, as well as ensure additional care is taken to minimise within-flock transmission.

Salmonella had been identified by EFSA as the major hazard for microbial contamination of feed, and although feedstuffs for poultry were sometimes heat-treated, this process may not kill all pathogens.

Heat treatment also significantly increased the cost of the feed, had a high carbon footprint, could damage vitamins and nutrients and had no residual effect, so unless other measures were taken, re-contamination could occur in the mill, during transport or on the farm.

A formaldehyde-based feed treatment had been found by the EFSA to provide a viable alternative to heat treatment, explained Mr Doyle, crucially preventing recontamination of feed.

The control agent, which sits within European Biocide Regulations, provides effective control of both salmonella and E.coli and exhibits residual activity, which protects against recontamination, for up to 60 days.

“Greater consumer awareness of food safety issues is translating into increasing demand from producers, feed compounders and food processors for products that improve safety throughout the food chain,” said Mr Doyle. “Each year more than 25m tonnes of feed and raw materials are treated with Termin-8 to ensure they are pathogen-free.”