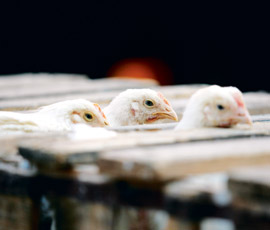 As part of the Get Better Get British campaign Farmers Weekly‘s sister magazine Poultry World looked at the sourcing of poultrymeat in British hospitals.

Documents obtained from one NHS board found that, although fresh chicken was sourced from the UK, stripped chicken and sandwich filler was sourced from Europe, Thailand and South America. Anecdotal evidence suggests that this is a trend across hospital catering: fresh poultrymeat sourced from the UK or Europe, and frozen or processed imported from third countries – but unlike the retail sector, no hard data about this sector exist.

A spokesman for 3663 said: “There is a price premium on UK chicken and generally a lot of our customers opt for our fresh Dutch chicken.

“This has a competitive price and a fully traceable accreditation standard, which is comparable to Red Tractor.”

But while Red Tractor confirmed that it had a “formal recognition of equivalence” with IKB, subsequent questioning by Poultry World revealed the IKB live bird stocking density was higher.

Sodexo, another major supplier, said in response to a number of FOI requests that fresh British chicken in the catering sites it ran was 95% Red Tractor. However this covered patients’ food for just two hospitals, as well as some mixed catering for a number of others, and staff food. A spokeswoman added that “most hospital food” was produced by subsidiary business Tillery Valley, which produces ready meals for heating at hospitals.

The Tillery Valley website says: “Ninety-three percent of our suppliers are UK-based.” But the firm, when contacted, said it had no individual procurement breakdown. Its parent company Sodexo confirmed this, and added that it was not Red Tractor assured.

The NFU said that, without question, all poultrymeat sourced for hospitals should be produced to Red Tractor standards or equivalent. “However, the NFU strongly believes that British public procurement, whenever possible, should support British poultry farmers, British businesses and the British economy. It’s about putting more British food on more British plates,” said a union spokesman.

The BPC said it, too, encouraged food services to offer British poultrymeat to their customers, sourced from Red Tractor assured British farms.

Have your say on hospital food