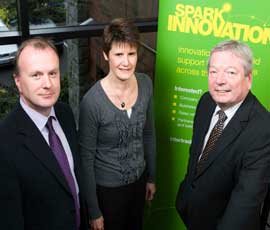 A two-year research project seeking to cut the level of campylobacter in live broiler hens, before they leave the farm, is about to be launched in Ireland.

Belfast-based Devenish Nutrition and Co Meath broiler producer Carton Brothers have been awarded grant funding by InterTradeIreland, through their INNOVA Research & Development programme, to undertake the research, which will study the effect of selected water-soluble products on the campylobacter population in chickens.

“During bird processing, these bacteria can transfer on to the carcass, contaminating the poultrymeat.”

Strategies to reduce the campylobacter population can be applied at various stages in the production chain. The Devenish/Cartons INNOVA project will target live birds, aiming to reduce the bacterial load entering the processing plant.

“In vitro laboratory tests have demonstrated that a wide variety of feed additives exhibit anti-bacterial activity against campylobacter, but such activity must also be demonstrated in the live bird if carriage of the bacteria in commercial flocks is to be successfully reduced,” said the spokesman.

The Devenish/Cartons INNOVA project will evaluate a range of additives applied via the drinking water for their effect on the campylobacter population of the live bird prior to slaughter.