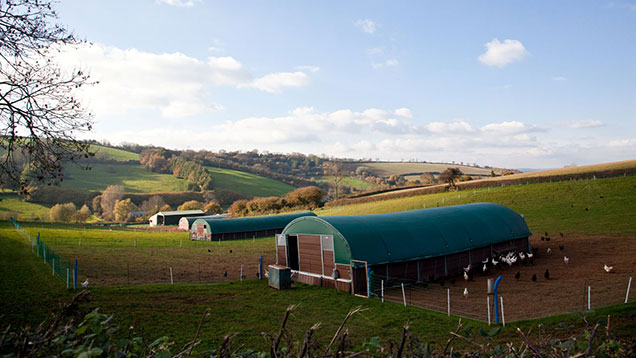 Poultry farms often come under fire for high levels of flies, and the challenge on organic farms is even greater. But there are alternative methods of control.

Flies proliferate in warm, moist environments with ready food sources, so the key on any farm is to focus on cleanliness, says Richard Turner at St David’s Poultry Team in Devon.

Clean up spillages, endeavour to keep litter dry within the houses, and store or spread manure well away from neighbouring properties and poultry sheds.

However, no amount of cleaning will prevent an explosion of flies if the weather is against you, so additional action will be required.

“On an organic system there aren’t many knock-down chemicals or larvicides you can use, so it’s all about preventing ingress of flies to the shed in the first place,” says Mr Turner.

“Pheromone traps, positioned correctly around the farm will help draw flies in – but obviously don’t place them inside the shed.” Sticky papers and electric zappers can also be of use.

Another method of control that is growing in popularity on both organic and conventional units is the use of parasitic wasps.

“Red mite and fly predators are widely used in the US and in horticulture in the UK,” says Mr Turner.

“There are a whole range of different wasps that predate house and stable flies, but we only use EU strains, so we’re not importing foreign species. The size of a gnat, they crawl around on the manure, so you don’t have them flying around like larger wasps.”

They are then sprinkled onto dry litter (where flies pupate) ready to hatch, mate, and inject their eggs into more fly pupae. A female wasp lays between three and 500 eggs – and they can also be used on livestock manure to reduce fly populations on mixed farms.

“Each site is likely to require a different approach, dependent on house structure, number of birds, age of flock and any particular fly issue,” says Alison Colville-Hyde, field services manager at St David’s.

“Best results are obtained with a full knowledge of the fly lifecycle, understanding where they are breeding and then treating with wasps accordingly.”

Wasps are used in the UK between March and October, as they are most active in warm temperatures. On an example 8,000-bird unit, Ms Colville-Hyde recommends applying a large bag of wasps (costing about £46) in early April once the birds are 22 weeks old, having allowed a layer of manure to build up to provide a breeding site.

Wasps are again spread at around 24 weeks and 26 weeks, to build up numbers.

“By now the fly population must be monitored, including investigating the pit for fly pupae, to determine whether or not more wasps are required,” she adds. “It’s very much done on a case-by-case basis.”

Of course, it’s vital to maintain the wasp population, so conventional producers should beware using any chemical controls, as this would wipe out any wasps present, warns Ms Colville-Hyde. “And you need to start building the colony early – if you leave it until you have a big fly problem it’s too late.”

“As an organic producer, our toolbox is pretty limited,” he says.

“We have a multi-age site, with 10 sheds of 500 hens each, and use wasps from Easter to midsummer – and we haven’t had any huge issues with flies even in a bad year.”

In the egg collecting rooms Mr Saunders also has fly paper and tape, and puts any cracked or stale eggs into sealed bins to avoid attracting flies in the first place.

“We’re pretty methodical when it comes to cleanliness and housekeeping,” he says. “We use a hoe to knock litter down between the slats in the house each day, and move the sheds after every flock.”

Each flock leaves about 25t of litter, which Mr Saunders spreads almost immediately rather than stockpiling it.

“We plough the site after moving the shed and grow corn behind it, which I think is very important. It’s also important to keep the litter as dry as possible and have plenty of ventilation – stuffy sheds seem more prone to flies.”

Burned lime is another option to dry and sterilise litter – although Mr Saunders doesn’t use it in conjunction with the wasps.

“We have moulted flocks before, and used lime to start afresh in the shed.”

He also takes regular litter samples to send off for worm and larvae counts. “Early reaction is key, so if we spot a problem we have to act fast.”