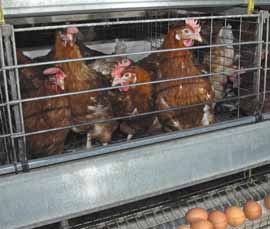 MPs have heard that retailers will form the front line in defending British farmers from unfair competition in egg production when the 2012 conventional cage ban comes into effect.

“There are clear challenges with enforcement [of the cage-ban], but the people who will ensure this ban is as good as possible are retailers, processors and consumers,” RSPCA communications director, David Bowles, told a hearing of the cross-party Environment, Food and Rural Affairs Committee (EFRA) in early March.

British Retail Consortium food policy director, Andrew Opie, agreed that responsible companies would have to think very carefully about their own supply chains. “All the major retailers have been involved to ensure the eggs which enter their supply chain will meet the regulations before they come in,” he told the meeting. “If it’s possible for retailers to do it, then it’s possible for other manufactures to do it.”

Overwhelmingly the message was that, while the government could push for an intra-EU trade ban, it would still be almost impossible to block eggs arriving at the border.

“Some 89m eggs a day will not be compliant, or 29% of EU production. It would be totally naive to assume that these eggs or egg products are not going to enter the marketplace from the beginning of January,” Mark Williams, BEIC chief executive, said.

“The directive should be enforced to the letter, and if more time is given, or taken, by producers in other states, then that production must stay within their own borders.”

Andrew Joret, director of Noble Foods, agreed that an intra-EU trade ban on illegal egg was essential. “But even if that is in place, we have to ask ‘what sort of policing mechanisms exist?’

“That’s really our big concern – that there will be seepage and leakage. We don’t mind competition, but it has to be fair competition. Those people haven’t made the investment the UK industry has made.”

MPs heard from the BEIC that the UK egg industry directly employs 10,000 people, with a further 13,000 working in ancillary industries such as feed, vets and equipment. Mr Williams warned that somes of these jobs could be lost if the UK was subject to unfairn competition.

“If you’re putting your production cost up by 8%, and bearing in mind that price is the governing factor, the impact will be severe.”

* MPs are continuing to analyse information from stakeholders and are scheduled to present their report on the effects of the conventional cage ban later this year.