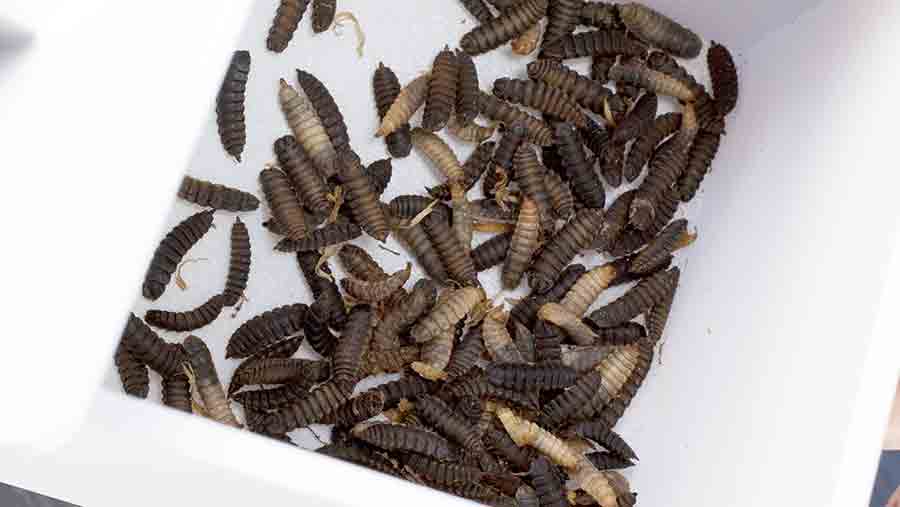 A two-year study to determine the build-up of undesirable nutritional values in fly protein fed different feedstuffs is under way.

The aim of the project, being conducted by co-operative ForFarmers and the University of Wageningen, is to look at whether there is any build-up or secretion of chemicals by insects following the use of new raw materials such as baked goods or canned soups in insect feedstocks.

It follows recent research by the company that looked at broiler behaviour when the birds were fed live insects.

Researchers wanted to see whether the chicks grew healthily in comparison with birds fed on a traditional diet and whether the broilers’ natural behaviour would improve as a result of the addition of live insects.

That trial took place at the company’s experimental farm in Nijkerk, the Netherlands, and involved 1,000 chicks placed in four separate groups. The researchers replaced 5%, 10% and 15% of the dry matter intake with insects in the trial groups.

Leon Marchal, ForFarmers director of nutrition and innovation, said the results were very satisfactory, with the birds devouring the high-quality protein larvae. “They were very eager to eat them. Feeding black soldier fly larvae to broiler chickens encouraged the birds’ natural free-ranging behaviour,” he said.

The current two-year trial is again using black soldier fly larvae, as they are able to grow on a number of different waste streams.

“We are looking to see whether there is an accumulation of heavy metals or mycotoxins in a range of insect-rearing feedstocks from spent brewers’ grains and distillers’ grains but also damaged or unused dry and wet retail products like baked goods or canned soups,” Dr Marchal added. “We want to provide concrete results using a really broad range of substrates.”

Interest in using insects in animal feed has grown since the European Food Safety Authority (EFSA) said last autumn there were no safety concerns when insects were reared on plant-based substrates.