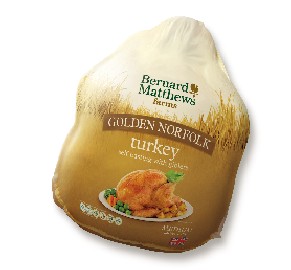 Group chief executive Noel Bartram believed the results showed that its recovery plans were working and had positioned the company for future growth.

“In 2008, we went back to our agricultural roots focussing on British turkey farming and providing quality, great tasting and affordable food. This, combined with initiatives to reduce operating costs, means we are now well positioned to concentrate on building upon the strengths of the business and accelerating the recovery that is already under way.”

The refocussing saw Bernard Matthews relaunch its brand with a new identity and image supported by advertising and new product launches.

He went on to add: “Sales in the current financial year are steady, but the trading environment remains difficult with consumers continuing to be cautious and retailers competing on price to retain market share.

“I am, however, pleased to add that Christmas orders are looking as strong as ever with turkey remaining the traditional choice for the festive Christmas meal and as always representing great value for money.”

The improvement in the UK was to some extent offset by the performance of the company’s Hungarian subsidiary, which suffered from a combination of high feed prices, and relatively low commodity meat selling prices. However, the implementation of a cost improvement programme is anticipated to improve the performance for 2009.

Looking to the future, Mr Bartram sees significant potential for growth with the consumption of turkey in the UK being a third of that in the US and less than half of that in France, Germany and Italy.

The Company also announced that Bernard Matthews himself is to retire as a director from the Holdings Board upon his 80th birthday in January. He will, however, remain as chairman of the recently established Supervisory Board.