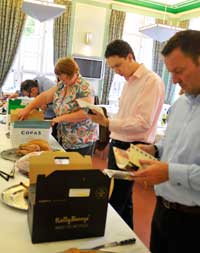 KellyBronze is the winner of the Best Premium Christmas category of the British Turkey Awards for the third year running.

The panel of independent judges declared KellyBronze the perfect traditional turkey for looks, taste and texture and said it would make a memorable Christmas dinner.

“Christmas is the time when we want something a little extra. This turkey, with its stylish packaging, the clear cooking instructions including a useful meat probe, and its superb taste, is it,” said the judges.

The runners-up were also bronze birds – from Usk Vale, of Pontypool and supermarket Morrisons.

Morrisons was luckier in the Best Christmas Convenience category, winning the trophy for its Luxury Turkey Crown with pork, sage and onion stuffing. The “sheer convenience and good all-round flavour” of the Morrisons joint beat off competition from Bernard Matthews and Asda.

Producer Lincs Turkeys won the trophy for Best Catering product, with a “tender and moist” fresh, free-range butterfly breast, while Bernard Matthews was victorious for its famous Southern Fried Golden Drummers, which took the judging panel back to their childhoods.

Finally, supermarket Morrisons scooped the coveted British Turkey Retailer of the Year title, being declared the winner for the sheer variety and range of its products, from turkey mince to convenience joints.