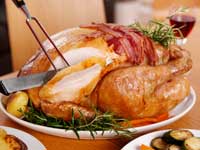 Turkey meat has shown strong growth over the Christmas period with the British Turkey Federation (BTF) reporting an 18% rise in sales, with whole turkeys making up 6.1% of the increase.

“We are very pleased with how the sector performed. Although the icy weather conditions in December presented a considerable challenge to consumers’ shopping habits, more people than ever wanted to serve turkey for the most important meal of the year, with many consumers buying their turkeys earlier than usual,” Noel Bartram, chairman of the British Turkey Federation said.

The fresh turkey market was worth an estimate £77m during four week Christmas period, the BTF said.

Visitors to the British Turkey website also soared with an increase of 49% on 2009, recording 353,259 visits during December.

Now the BTF plans to capitalise on the success with their “I Love British Turkey” campaign, to keep people cooking with turkey throughout the year by highlighting its characteristics such as high protein, low fat as well as being rich in vitamins and minerals.