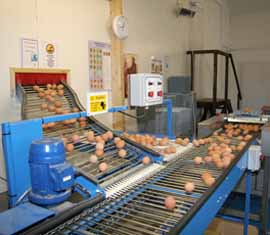 Egg packer Stonegate has cut the price it pays its free-range suppliers, as the over-supply of eggs and pressure from the retailers continue to squeeze the market.

It is also understood that Oaklands has made a similar move, while other packers are calling for early flock depletion.

Stonegate agricultural director Richard Kempsey told Poultry World that they had cut prices by 5p to an average 76.6p/doz for its free-range producers, except for those who supply Waitrose under the Columbian Blacktail scheme.

Waitrose producers, who actually make up three-quarters of all of Stonegate’s free-range suppliers, were actually getting a 2p/doz price rise.

“These cuts are purely off the back of the oversupply in the market and the huge pressure on our invoice prices,” said Mr Kempsey. “It’s brutal and it’s blunt, but this is the fairest way we can deal with it.”

Mr Kempsey expressed his real frustration at the slow pace with which pullet numbers and chick placements were coming down. “They’ve come down a bit, but the overhang in the UK is huge and this is only scratching the surface,” he said.

The downward move in producer egg prices comes at a time when some supermarkets have been increasing the price they charge consumers for branded packs – such as Woodland and Happy Eggs – by 10-20p/doz.

Own-label free-range eggs are, however, unchanged on the month, according to the Poultry World survey, with “large” quoted at £3.36/doz and “mediums” at £3.16/doz. Value eggs, however, have dropped substantially – by 26p to £1.96/doz for “mediums”, in part reflecting the cascading of surplus free-range eggs.

What do you think of the latest cuts in egg prices? What should the industry do? Have your say on our Poultry Platform forum.