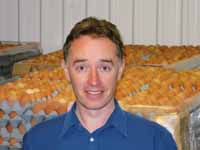 Faced with serious problems outside their control, egg producers should concentrate on the things they can influence, such as cost control and flock performance.

“Money is tight and times are hard,” he said. In the end, it would be about survival of the fittest and, possibly, about also who had the kindest bank manger.

The main reason for the current financial predicament was increasing raw material costs, he said.

“As egg producers, we are not in control of world commodity prices, and these high feed prices are likely to be with us for some time. Our feed costs are serviced by our egg revenue and some of the major packers have reduced prices in recent weeks.

“In the short term, there is very little prospect for egg prices to increase, due to over-supply.”

The current laying flock was estimated at about 34m, said Mr Hollins, whereas the UK egg market tended to be in balance at a much lower level of about 30m birds.

“We can’t do anything about the birds on the ground, but as egg producers we can look closely at our costs.”

Costs of production were broken down into feed, pullets and general management.

Feed and pullets accounted for 56% and 16% of costs respectively, with finance costs and labour at about 10% each.

* A 1% reduction in seconds could save nearly 10p a bird.

For example, a 16,000-bird flat-deck house on natural ventilation could use an extra 80t of feed compared with a multi-tier on forced ventilation – equivalent to an extra £20,000.

Another parameter to get right was phased feeding. The cumulative differential for the various rations during lay was £26/t, going from the pre-peak spec to end-of-lay. It was vital to match ration spec to daily intake to achieve the correct daily nutrient requirement.

Stuart Hinchly of HST Feeds agree and suggested that many producers overfed their hens.

“They are often paying for a higher-spec ration than they need. I come across very few farms where they can tell me what their daily feed intake is. And without that figure, we cannot tell you what the right feed spec should be. If we had those figures we might be able to help you save some money on your feed.”

As a pullet rearer, Mr Hollins was starting to receive calls from producers who had ordered pullets, asking how much it was going to cost not to have those birds delivered.

“One message that’s coming across is that some producers would rather pay to cancel the order than be producing for the next 13 months at a loss.”

But another route might be to look for additional opportunities to raise revenue, he suggested. Increasingly, the premium end of retail sales for free-range was for eggs derived from systems with enriched ranges.

“Barren, open grassland fields no longer represent a premium as far as the retailers are concerned. They want to see range cover, trees out there and, as they expand further, they are looking at biodiversity action plans.”

This involved identifying the native species, such as red squirrels or bats, and taking measures to encourage them.

More revenue might also be raised on the back of the egg business, he said, such as installing photovoltaic cells on shed roofs or in the range area and developing sales of poultry manure for fertiliser.

“Fertiliser prices are going ever upward, and if you’re keeping your poultry manure good, dry, stackable and usable, there’s a sale value to that these days.”