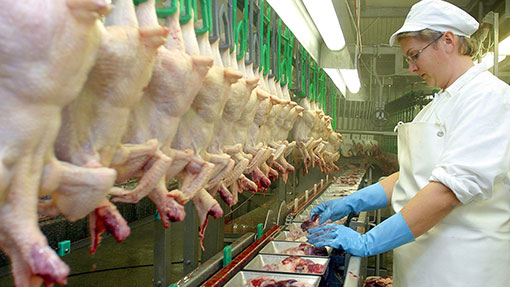 Northern Ireland poultry business Moy Park has announced growth of both sales and profits in the year ending 31 December 2013, despite what it said were “challenging economic and trading conditions”.


Moy Park put the figures down to growth “across both retail and food service channels in the UK, Ireland and continental Europe”.


The company, incorporating Marfrig’s European business, which processes beef and pork as well as poultry, says it now employs11,500 people across 16 production sites in the UK, Ireland, Holland and France.


“The business delivered a strong financial performance in 2013 in what were challenging economic and trading conditions and against a backdrop of high commodity input costs,” said Janet McCollum, chief executive at Moy Park.


“The company’s performance reflected the great efforts and contribution of the Moy Park team in expanding sales and controlling costs while investing for future growth.”


She added demand for UK-sourced poultry had increased, and with it the opportunity to increase Moy Park-branded poultry in supermarkets.

“This, together with underlying market growth reflecting the popularity of poultry meat amongst consumers, has enabled Moy Park to increase fresh poultry and convenience foods sales through successfully growing with both existing and new customers.”