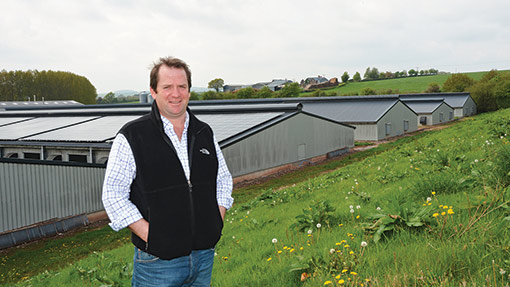 The poultry sector is witnessing a surge of investment, driven by both stronger demand for the end product and the good paybacks available from renewable energy.

In late 2013, for example, Cargill Meats Europe announced a major reinvestment in its processing facilities in Hereford, taking capacity from 1.7 million birds a week up to 2 million. The search then started for producers to fill that capacity.

“There is real confidence in the chicken market, boosted in no small part by the commitment from several retailers to buy British in the wake of the horsemeat saga,” explains Cargill’s agriculture director John Reed.

Poultry is expected to account for more than half of the UK’s entire meat consumption this year, up from just over one-third 20 years ago. The nation’s appetite for chicken has been helped by price, with poultrymeat seeing the lowest rate of increase across 35 different food categories over the past two decades.

“There are still significant opportunities to increase production, hence our confidence in investing in growing capacity,” says Mr Reed. “What surprised us was the uptake by farmers after our announcement.

“Several approached us straight away to say they had planning permission and were ready to build. It’s clearly something they had been considering and were just waiting for contracts to emerge.”

He reports particularly strong interest from farms with arable operations, pointing to the “significant advantages” in mixing poultry with cropping – such as cutting back on artificial fertiliser use and reintroducing organic matter to the soil through use of the poultry manure.

Kitting out fully with PV panels and biomass boilers could take this cost nearer £1.7m, with loan sizes varying, depending upon capital contributions available within the existing business.

“Biomass boilers vary hugely in price, depending on their capacity and feedstock,” he explains. “You basically get what you pay for, with small boilers fed off a pellet line coming in at around £30,000, up to large-capacity boilers capable of using a multitude of fuels at about £100,000.

“The benefit of multifuel is that you are protected against any one fuel source becoming too pricey,” he adds. “You also need to add more than £50,000/shed if you want underfloor heating, and about £1,000/kW for a PV installation.”

Against this level of investment, he says one might expect a 10-12% return on capital, depending upon efficiency, though some top-end producers are achieving considerably more than this.

“As you scale up, the efficiencies improve and many potential producers look at a four-shed development as the ideal starting place – provided there are no planning barriers dictating otherwise.”

Jeremy Jehan from chartered surveyor Brightwells says clients of his who have applied for planning permission to expand facilities have encountered relatively few problems to date.

“Herefordshire County Council has been very positive about the overall economic impact and jobs that will arise from the county’s farmers responding to this opportunity,” he says. “However, there’s no doubt that expanding an existing operation will get an easier ride than a brand new development on a greenfield site, and smaller expansions are easier than large ones.

“Planners are likely be more positive about initially setting up two smaller sheds and running them effectively to prove there are no issues. So while the opportunities are out there, it’s important to take planners and the local people with you by adopting a steady approach.”

One poultry producer on the expansion trail is Andrew Davies (pictured top), who now grows about 2 million broilers a year for Cargill on his south Herefordshire farm.

Having got out of milk production in 1985, the farm business initially went into turkey production, building up in stages to five sheds. Then, in 2001, the decision was taken to switch to broilers, with capacity for up to 195,000 birds at any one time.

Planning permission was gained in 2010 for a further six sheds, one of which has been built and another planned for the near future.

Mr Davies has also invested heavily in renewable technology, as a way of “putting poultry margins back where they should be” and reducing the payback time on money ploughed into the business.

“Costs of production have gone up, but returns haven’t kept pace, so income from renewables is becoming pretty important,” he says.

“Without renewables, you’d be looking at 15 years or more to pay back the investment in a standard shed; with renewables, this is nearer six years if you get your costs right.”

Mr Davies has installed 198kW boilers (pictured below) to heat his six sheds; each takes a multifuel feedstock of anything from woodchip to miscanthus, rape straw and poultry litter, increasing his ability to deal with supply issues or future price hikes. 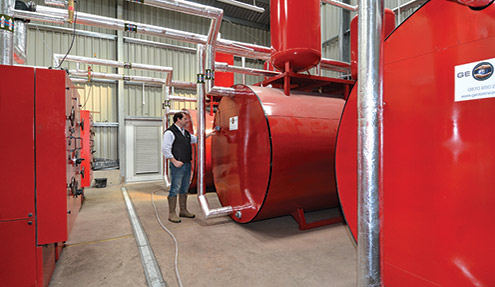 Further insulation from fluctuations in biomass feedstock markets will come from the 8ha of his own miscanthus he has planted this year.

“The miscanthus will be due for its first harvest in two years’ time, and with yields of about 20t/ha expected over the next 20 years, this should leave us around 15% self-sufficient in energy crops at our current rate of use,” he explains.

“This means we will be less reliant on woodchip, which we currently source as timber offcuts from the Forest of Dean. It’s a great local supply, but the price has recently risen to £31/t and we still have to pay for chipping on top of that.

“All my new sheds have biomass boilers with 10,000 litre rather than 3,000-litre water tanks, because this means the boiler starts up less frequently – the most costly part of the process – and runs for longer and more efficiently.”

The underfloor heating installed in the last of his sheds has also proved especially beneficial during the initial 18 days of the production cycle. “It might add £55,000 to capital outlay, but before a batch of chicks arrives in cold weather, it can take 25% less energy to get the shed up to temperature. 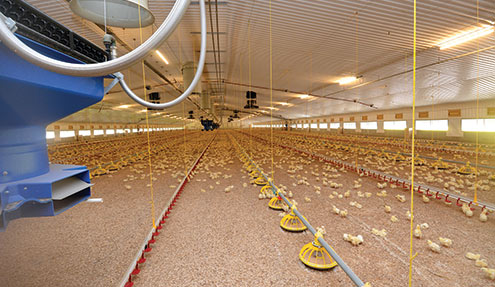 “Then it dries the litter out better, lowers ammonia levels, reduces odour and keeps an even temperature across the whole shed. I’ve seen perfect chick distribution in that shed – even on the coldest of days – and a reduction in podo-dermatitis.”

Photovoltaic panels have also fitted well in Mr Davies’ system. Luckily, his existing sheds already had south-facing roof space and he was able to install a capacity of around 250kW with little difficulty.

“The cost of buying and installing 250kW photovoltaic panels is roughly £1,000/kW – about a third of what it was three years ago, making it far more affordable and taking up less borrowing capacity. We haven’t been able to carry out a direct comparison to determine the exact savings, but we estimate that the panels take about a third off power costs in the summer months.

“While looking at the expansion we also invested in a new 1MW substation, just to secure our connection to the network. This will support our planning for more sheds as supply and capacity on the grid gets tighter, but also gives us the opportunity to supply more back to the network when I’m generating power I don’t need.

“You never know what the next renewables development will be, but I want to make sure we can take full advantage of it because costs will only rise.”