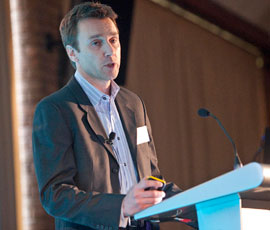 The pig and poultry industries need to recognise the power of the consumer’s “unconscious mind”, if it is to get its marketing messages across effectively, consumer behaviour specialist Philip Graves told delegates at Pig and Poultry LIVE 2011.

“It’s not just about giving consumers all the facts,” he said. Consumers were not rational in their behaviour and it was often the subliminal messages they received that would influence their shopping habits.

For example, changing the music in a retail store, introducing particular smells, placing products on different shelves or changing the labels could all have a profound effect on what the shop sold.

If the industry decided to reject processed animal protein from rations, while their competitors in Europe included it, Mr Graves suggested a campaign that pandered to the negative associations consumers might have. It should visually differentiate British produce.

But if the sector was to use PAP, then building into a general campaign about sustainability was the way to go, as it would then be possible to avoid having to talk about the difficult issues in isolation.

“To get the attention of the unconscious mind, you have to be repetitive and resonate with positive associations.”