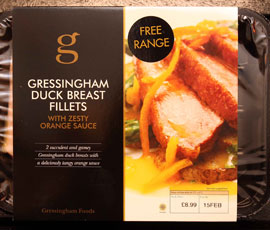 Gressingham Duck graced the royal china last week as the Suffolk duck producer saw their produce served at the reception following the wedding of Prince William to Kate Middleton.

At the Buckingham Palace reception only British food from companies holding a Royal Warrant was served, with 650 VIPs tucking into more than 10,000 canapes.

“It’s a huge honour to see Gressingham Duck featured at the royal wedding – especially as the menu was designed to showcase the best food that the country has to offer. To be part of such a special occasion and to have our duck recognised on a national level as a quality product is a great privilege.” said William Buchanan, commercial managing director of Gressingham Foods.