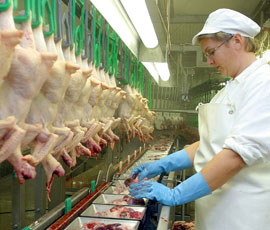 The Scottish government has made an offer of financial assistance to 2 Sisters Food Group, to help maintain production and employment in the Scottish plants it acquired from Vion earlier this year.

In a recent question time debate in the Scottish parliament, finance secretary John Swinney said it was a key objective that the various plants involved in the takeover were maintained “to provide clear outlets for quality Scottish agricultural produce”.

In relation to a specific question by James Kelly, SMP for Rutherglen, about the future of the Cambuslang poultry plant, Mr Swinney confirmed that the government “has made an offer of financial assistance to the 2 Sisters Food Group”.

“But it is conditional on it sustaining the current level of employment at the operations that the group has acquired,” he added. “Issues in connection with that are still under negotiation with the company.”

Mr Kelly said he was glad that the cabinet secretary has been able to have regular discussions with 2 Sisters, something he had had difficulty in establishing. “Two months down the line, we still lack clarity about the 2 Sisters Food Group’s plans for Vion in Cambuslang,” he said.

The Cambuslang plant, which employs about 350 staff, was one of three plants 2 Sisters acquired in Scotland in March, the others being the poultry plant at Coupar Angus, and the McIntosh Donald red meat plant at Portlethen.