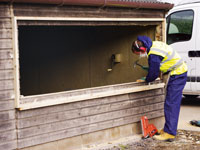 Thinking about putting windows into your broiler shed? Wendy Short investigates the pros and cons.

Increasing numbers of poultrymeat producers are putting windows into their broiler sheds in order to meet the tougher RSPCA Freedom Food standards which came into force at the start of 2010.

Chickens have well-developed colour vision and it is their dominant sense, says Dr Marc Cooper, senior scientist in the RSPCA’s farm animal science department. Daylight is also necessary for chickens to reach their full potential.

“Natural light allows staff to manage and inspect sheds more easily. It particularly helps with the cleaning out process, because operators can see whether the shed has been cleaned and disinfected properly.”

T Clarke and Sons, Lincolnshire, has installed more than 15,000 windows on poultry units nationwide. Director Paul Clarke estimates around 85% were commissioned by producers in order to comply with the Freedom Food standard.

Some producers choose to put in larger windows that allow more than the 3% of natural daylight the Freedom Food scheme dictates, says Mr Clarke. Their decision is partly influenced by the possibility of future rule changes, though many customers have commented that increasing natural daylight creates a better environment for the workforce, as well as for the birds.

The complexity of installing new windows, or enlarging existing openings, depends largely on the construction of the building. If alterations are likely to weaken the structure, additional load-bearing timbers might need to be retro-fitted.

Building techniques and materials have become more sophisticated over the years, adds Mr Clarke. Of the wide variety of options available to the poultry producer, he suggests that a sealed, reinforced UPVC unit – similar to domestic double-glazing – will add strength to the building frame.

Enlarging window openings can also lead to increased heat loss and, in most cases, it will be cost effective to invest an extra 3%-5% in window insulation. Mr Clarke recommends the use of argon gas as an insulating material, pumped between the two sheets of a sealed glass unit.

Another way to keep down energy bills is to install window blinds. These can be operated manually, connected to a timer or set to open and shut automatically in response to outside light. While fully-automated blinds might increase overall cost, by as much as 40% on some units, it can also be a fairly straightforward exercise in some types of housing, which can be easily be adapted using a motor linked to the main control room.

The cost of installing or enlarging windows depends on building design and materials, says Mr Clarke. Prices start at 40p/sq foot, but can rise to £1/sq foot in an old building, especially where ventilation and external light baffle systems are in awkward positions.

Roof and wall insulation can play an important role in the reduction of energy bills, he points out. Traditional fibre glass can slip down over time, allowing pockets of cold air to form in the cavity above. One solution is to use a rigid insulation in the walls, forming a barrier between the external and internal walls.

• Chickens must be provided with natural light

• Light openings should correspond to at least 3% of total floor area, with a target of 6%

• Alternatively, the light openings should be a minimum of 75% of the length and 15% of the height of the two longest side walls

• Each light opening must be no smaller than 0.56m2

• It must be possible to control the amount of daylight entering the building, for example by using shutters

• Window material that helps prevent condensation forming should be selected, such as double-glazing

• Natural light must penetrate all areas of the house

• Where areas of different light intensity are provided, ensure a gradual change between areas

• Birds must be exposed to dawn and dusk periods, through natural or artificial means